Gangs stealing meat from supermarkets are re-selling it to restaurants and dairies and on Facebook, a crime prevention company says. 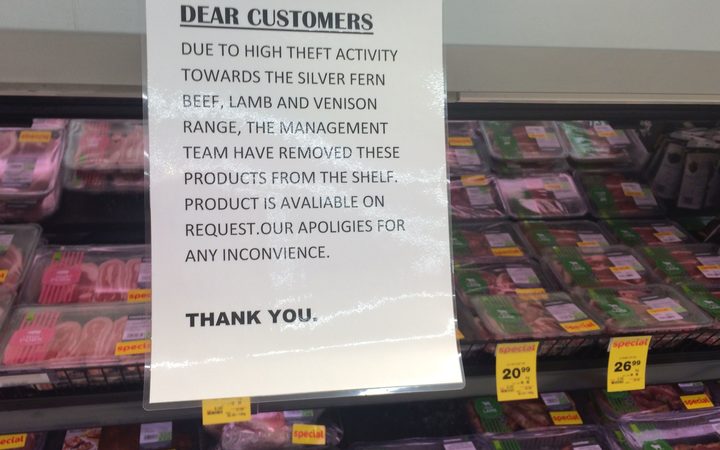 The note to customers at the Countdown in Sylvia Park. Photo: RNZ / Claire Eastham-Farrelly

All Silver Fern Farms meat were temporarily removed from an Auckland supermarket after the product was targeted by thieves.

Countdown at Sylvia Park put up a sign earlier this week telling its  customers that Silver Fern products have been removed from the shelf and would only available by requested "due to high theft activity".

However, Countdown said the products were now back on the shelves.

"There was a one off incident in this store, where some Silver Fern Farms products were stolen. While the store investigated it, the products were temporarily taken off shelf. They have since been returned to the shelf, and are available for our customers," a Countdown spokesperson said.

Corned beef had also been taken off the shelves at rival Pak'nSave at Sylvia Park because it was being stolen.

"Meat, like any other high value product, is targeted by shoplifters across our stores.

"Corned beef has been targeted by thieves in the past, but the team at  Pak'nSave Sylvia Park say this is not an issue at present and the product is on the shelf as normal," Foodstuffs spokeswoman Antoinette Laird said.

Silver Fern Farms declined to be interviewed but said the Sylvia Park theft was a one-off and "had very little impact".

Meat is one of the most stolen items in grocery stores and it was being stolen by organised crime groups, crime prevention software company Auror said.

"The theft of meat comes in quite high quantities. It's not for feeding, it's for on-selling quickly on black markets," Auror chief executive Phil Thomson said.

Stolen meat was being sold to restaurants, pubs and dairies as well as on social media channels such as Facebook, he said.

"We're seeing it happen right across the country," he said.

Retail New Zealand figures show about $2 million worth of products were stolen from retailers each day.

"I remember chasing people who had slipped meat in their bags down the road when I used to be a butcher," he said.