Team New Zealand's chief executive has confirmed at least one syndicate has approached the team to get them to jump ship for the next America's Cup race.

The team landed at Auckland airport today after winning the Auld Mug in Bermuda, with a victory parade planned in the city tomorrow.

Grant Dalton told Checkpoint with John Campbell that Team New Zealand sailors and staff were often targetted by other syndicates with more money.

But he had a clear message to other teams who might want to poach his staff.

He said he would not name the syndicate in question but said he was very keen to keep a hold of his team. 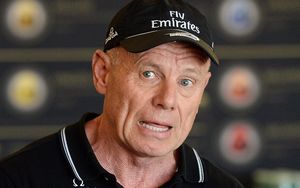 Helmsman Peter Burling said he was going to take a couple of weeks off before he made any decisions.

Trimmer Blair Tuke said thinking about job offers from other syndicates was something for the future, and for now he was focussing on enjoying the win back home with friends and family.

Earlier the sailing pair, who race together and are World and Olympic champions in the 49er class, were coy about whether they would defend their Olympic title in 2020].

Tuke said an Olympic campaign was a huge amount of work and comparing the America's Cup and Olympic success was difficult.

Wellington to get parade

Wellingtonians will be able to see the America's Cup and the victorious Team New Zealand during a parade through the capital next Tuesday afternoon.

Burling and his crew will be welcomed at Parliament at noon on Tuesday 11 July, before the Auld Mug is held aloft along Lambton Quay and Willis Street.

Celebrations will conclude with speeches in Civic Square.

Wellington's acting mayor, Paul Eagle, said he encouraged people to turn out to give the team a memorable welcome.