A Dunedin school is embracing its students' right to wear their uniform of choice regardless of their gender.

Dunedin North Intermediate students now have a choice of five options: a kilt, culottes, trousers, shorts or a PE uniform.

Principal Heidi Hayward said two students came to her in 2015 asking if they had to wear gendered uniforms, and she could not think of a good reason to enforce it.

"I went away and had a think about it and thought, that seems reasonable."

Students were then allowed to wear either a kilt or shorts, she said.

However, Ms Hayward said the school had since broadened its uniform range this year to include culottes, for students who might not feel comfortable in the more "masculine" shorts.

"Really there's nothing ground-breaking, we're just saying these are the uniform options, pick what you feel comfortable in."

The school's only sticking point is that students adhere to the correct presentation of their chosen uniform.

Ms Hayward said she was "bemused" the uniforms had become a talking point. 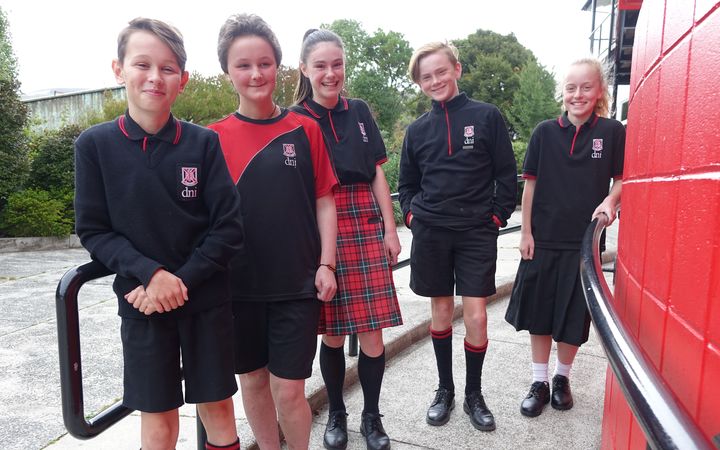 Year 8 student Bonnie Leichman,12, was instrumental in bringing about the change - she asked Ms Hayward if girls had to wear skirts.

She said she got a few odd reactions when she started wearing shorts.

"I had lots of comments saying 'is that a boy or a girl'."

However she said it did not bother her and she planned to keep on challenging gendered uniform policies when she got to high school.

Year 7 student Caspar Rennie-Weston, 11, said it was nice to have choices if he felt like a change.

"When I found out that I could actually have an option of uniform it made me feel a bit more relaxed."

Year 8 student James Johnson, 13, said he has considered trying culottes, which might be more comfortable than shorts, while fellow Year 8 student Ella Clarke, 12, said she would stick with the kilt because it added a splash of colour to the uniform.

Ms Hayward said she did not expect a lot of boys would decide to wear kilts or culottes any time soon.

"But it still sends the message to them that it's not actually a problem to wear what you feel comfortable in."

She said the school chose to remove gender specifications instead of bringing in a new gender-neutral uniform because it was cheaper.

The New Zealand Principals' Federation and the Secondary Principals Association both said they had not heard of other schools taking the same line as Dunedin North.

They said it was up to each school community to decide what was right for them.