The safety of revellers was put at risk by the decision not to cancel the rained-out Sundaise Festival sooner, festival-goers and emergency services say.

About 200 people were evacuated after the banks of the river behind the event near Waihi burst on Friday night, creating torrents around the stages and campsites. 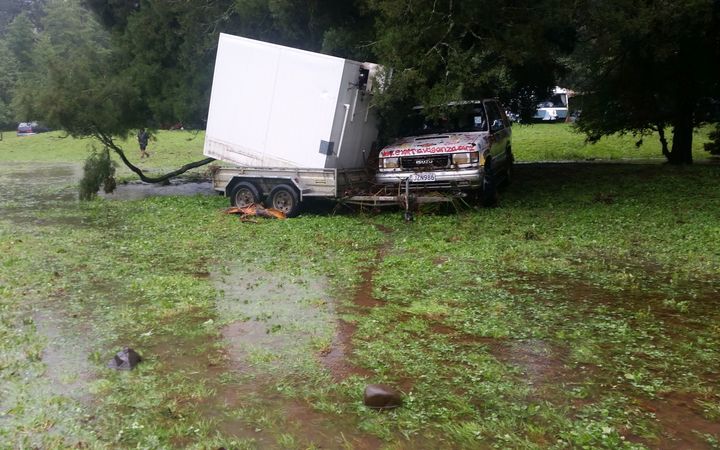 This white chiller was moved by the water and the car was submerged to its windows. Photo: RNZ / Eva Corlett

Festival organisers said that prompted them to order the evacuation of some attendees about 10.30pm.

But food vendor and artist Lyndall Jefferies said the call came too late.

"They're incredibly lucky that at this stage it looks like there has been no loss of life. A guy was in his caravan which started getting swept away and he got out of it into five-foot-deep water."

The power of the water made it incredibly dangerous and the festival should have been cancelled or postponed, Ms Jefferies said.

Festival-goers were unprepared and there should have been a clearer evacuation plan.

"You had festival-goers with no raincoats, no gumboots, no dry warm clothes. You had people carrying children... Just barefeet, shirtless people walking up away from the site."

Lighting installer Andrea Gaia got into difficulty when she went back to her tent following the evacuation order.

"But there were some people on the other side of the bank that formed a little human chain that came in and pulled me out which was good. It wasn't too dramatic but it was ... a little bit scary."

She was well taken care of once she made it to safety, Ms Gaia said.

"There was a lot of people there supporting and helping people across and they set up a rescue centre on the other side of the river in the shed up the top with blankets and food and spare clothes for everybody."

She had sympathy for the organisers.

"They're pretty sensible people. They were keeping a very big eye on the weather and there was a little bit of letting us know that there was a contingency plan should the weather shift and change and go to the south," she said.

"It was looking like at the time that it was going to go around us."

Hauraki Civil Defence assisted with the evacuation, and police and the army were also called in to get festival-goers out by bus, with about 80 people evacuated to Waihi.

Hauraki District Council chief executive Langley Cavers said Civil Defence, which reported the evacuation was a bit chaotic, was disappointed the festival went ahead on Friday given the weather conditions and warnings.

"There was potential for threat to human safety as a result of the wet weather and the flooding that occurred," he said.

"I've had reports the water was going through cars and vans and the like and it doesn't take much water in the middle of the night to pose a reasonable risk."

Sundaise Festival organisers have not yet responded to requests for comment.