Families fight to keep their homes

Up to 18 families could be forced to leave their homes to make way for a water treatment plant in west Auckland.

Among the families in the community of Oratia is a newly rehomed nine-year-old foster child.

The community is asking Watercare not to choose Parker Road for the replacement of its 90-year-old Huia Water Treatment Plant, and instead build it across from the existing site in Titirangi, which would not require the destruction of any houses.

Parker Road has been identified by engineers as the preferred option.

Tina-lee Viskovich, who grew up on Parker Road, said her grandmother fostered the boy only two weeks ago.

"We've promised him this is his 'forever home', and now he's standing out on the front lawn, saying 'please don't take my home'." 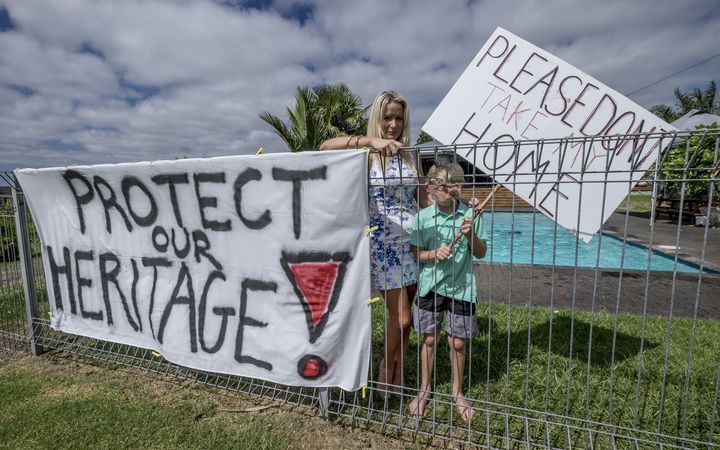 Parker Rd residents are united in their stand against a water treatment plant, which has been proposed for their street. Photo: RNZ/ Brad White

Ms Viskovich said the stress was now having a physical impact.

"Children are starting to have panic attacks, they're watching their parents cry, it's so unfair. And the older people are going in for suspected heart attacks," Ms Viskovich said.

If Parker Road was chosen, Watercare could take any homes it needed under the Public Works Act, but Ms Viskovich said no amount of money would be acceptable.

Julian Pirie, 67, said he has spent 20 years designing his dream home, and the past 14 years building it.

"I've been planning to be in Oratia for a long, long time," he said.

"We lived in Glen Eden in our one and only house up until now for 35 years and always I knew in some sort of secret knowledge there was one last valley in Oratia and just at the right time we spotted an ad for this property."

Watercare said there was no preferred option and it would continue community consultation before making a decision in about three months.