Man on mend after driving flaming caravan away from neighbors

Basil "Baz" Lloyd's clothes were on fire as he jumped back into his blazing motorhome and moved it away from other campervans at a Taupō site, but he laughs off suggestions his actions were courageous.

Mr Lloyd, 65, is now recovering in Waikato Hospital and planning his next trip, despite his campervan going up in flames two weeks ago.

He was in Taupō installing a new fridge in his vehicle, when he made an error while disconnecting and reconnecting the gas bottle.

While cooking a steak meal later that day, the motorhome exploded into flames.

"I went to put the pan back down on the gas stove, and next minute there was an almighty boom. I could look over and see the bed was on fire, and I looked around and thought 'I've got to get out of here'."

The side of the motorhome was blown out by the blast, and Mr Lloyd managed to pull the burning mattress out of it, but he said the fire was getting worse and threatening other nearby campervans.

"I got to get it out of the way so nobody else gets hurt, just me, and I'm already burned." 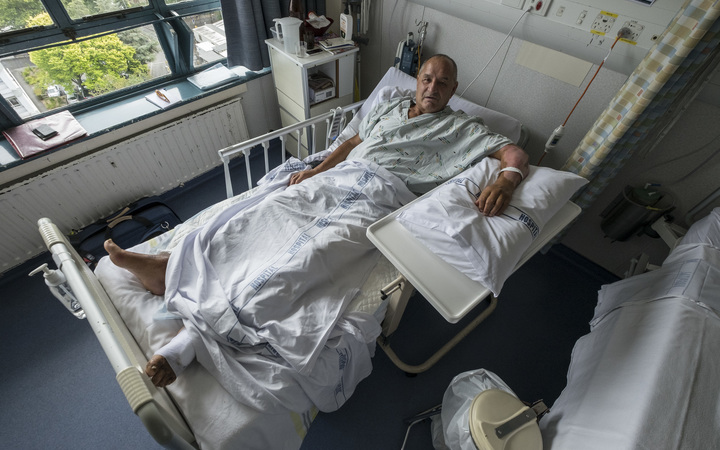 Mr Lloyd in Waikato Hospital: He is already making travel plans for when he gets out. Photo: RNZ/ Brad White

Even though his shirt was on fire, Mr Lloyd drove the motorhome about 100m away, where he used a garden hose to put himself out, before turning the water on the campervan.

He was badly burnt but said he was healing "quite well", and denied his actions in jumping back into his vehicle and moving it were courageous.

"I just didn't want anybody else to get hurt. I'm just the ordinary Kiwi bloke who likes to look after people and property, I don't call it courage."

He told Checkpoint with John Campbell that he had plans to try and get his motorhome going again, and hoped to travel around the South Island once he had recovered.