Mr Stanton, also known as Hone Ma Heke, lives in a makeshift campsite on the city's main street, Trafalgar Street, where he also hangs his laundry and protests his right to live how he chooses.

He has been imprisoned, fined, and trespassed off Nelson's public land, but continued to return, each time to occupy a new space. His habit of living rough has upset many inner city businesses, who say his presence outside their shops, and his anti-social behaviour, turns customers away. 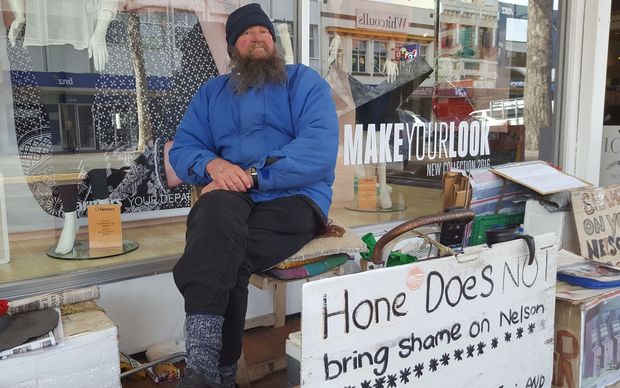 City councillor and mayoral candidate Pete Rainey has put his potential job on the line by promising a solution for all over Mr Stanton's situation, or quit if he can't resolve things.

He said while he had some sympathy for Mr Stanton, the time had come for action.

Exasperated retailers held a meeting on Wednesday, with the aim of finding a way to manage the matter themselves. They said they were frustrated that neither the law, nor the council, seemed to have the means available to them to tackle the problem.

"I supported him when he was first protesting but as I learned more of the back-story and was witness to more of what I'd call an 'occupation' of the sidewalk, I think the rights of the shop owners, the tourists and the people sending their dollars here in the CBD should be taken into account as well," Mr Stormann said.

Mr Stanton once carried all his possessions in a cart towed through town by his horse Barney. The horse and cart was then parked for hours in the street outside targeted shops. Barney was eventually taken off Mr Stanton and is now cared for by the SPCA. 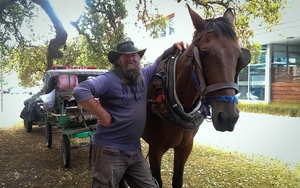 Mr Stanton lived surrounded by his possessions, including a copy of the King's charter, the 1215 Magna Carta, and a multitude of press clippings about his many disagreements with law makers and enforcers. He said he was trying to draw attention to society's failings.

"Each and every one of us is guilty of allowing our society to have become the way it is today, simply because we sit on our arse and do nothing ... whence, that's why I'm sitting on my arse to do something about it," Mr Stanton said.

He said he had as much right to live the way he did as a person who chose to live in a house, or a house-truck. He said he respected the rights of business owners.

"Oh, absolutely they have rights, but hang on, what is more important - the money or the humanity?" Mr Stanton said.

Mr Rainey has spent nine years on the council that has tried to sort the matter. He supported people's right to protest, but said Mr Stanton was infringing people's freedom to run their businesses, or just to walk down the street.

However, he would not be drawn on the plan he had in mind.

"I'm not prepared to outline what they (plans) are in the media, because that would be stepping on potentially a relationship between me and Mr Stanton I'm trying to build."