A group of Indian international students who face deportation say they are being unfairly punished after their agents faked financial information in their study visa applications.

There will be a rally in Auckland this weekend in support of about 150 Indian students at risk of deportation.

International students pay between $15,000 and $35,000 to study in New Zealand, and a spokesperson for the group of nine students told Checkpoint with John Campbell they had no idea their papers were fake.

The spokesperson, Anu Kaloti from the Migrant Workers Association, said the situation was "absolutely appalling".

"I am really really ... angry, furious, frustrated. These young people have spent so much money to acquire meaningful high-quality skills [and] qualifications and their parents have put all they have into it, and at the end of it they are being punished for something they have not done," Ms Kaloti said.

The students' families were not well off and had taken out loans and sold or pawned assets to get the funds together, she said.

"It is not a small amount, it is a huge amount that they have to put in."

There would be a lot of social stigma for the students if they returned home without a qualification, even though it was not their fault, Ms Kaloti said. 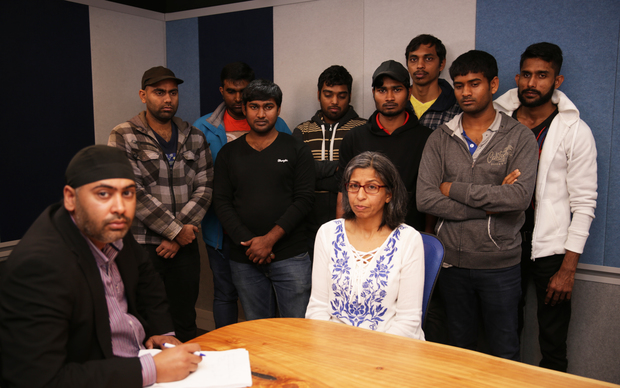 Another spokesperson for the group, Sunny Sehgal, is a former international student.

It was the students who were the victims, he said.

"These are not culprits ... they haven't done anything wrong."

He said the New Zealand government needed to take action against scammers and education providers rather than punishing students.

"Sending these students back to India ... it would be not a good image for New Zealand in other countries as well," Mr Sehgal said.

Minister of Tertiary Education Steven Joyce told Checkpoint there needed to be strong rules about who got access to New Zealand's education system.

He said 22,000 students came to New Zealand from India every year, and of the approximately 40 Indian students facing deportation, the majority of the cases related to fraudulent visa applications.

"We turn down around 38 or 40 percent of all applications for visas from Indian students in India because of the level of fraud."

The Indian market was "challenging", he said.

Ultimately students were responsible for what was submitted on their behalf, Mr Joyce said.