The Zika virus - a relatively mild disease spread by mosquitoes declared a global emergency last week - has thrust microcephaly into the spotlight. 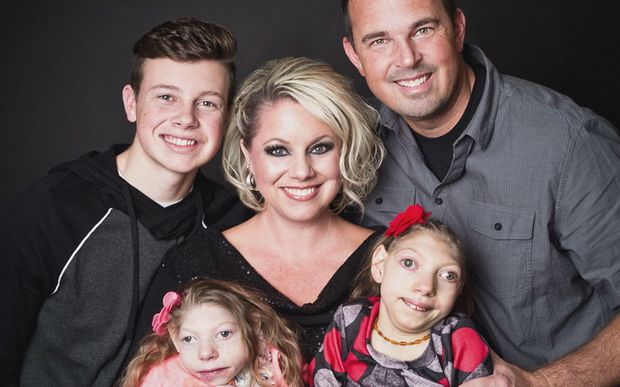 For Kansas mother-of-three Gwen Hartley, however, the condition, which causes children to be born with unusually small heads and damaged brains, has been a feature of the last 15 years of her life. Her two daughters, Claire, 15, and Lola, 10, both suffer from it.

Microcephaly often leads to a shortened lifespan and, in the vast majority of cases, serious developmental issues. Claire and Lola weigh barely 20kg between them, cannot speak or walk, and suffer from daily seizures.

Speaking to Checkpoint with John Campbell, Mrs Hartley said that she was grateful to be able to share her experiences of the condition, and was glad that awareness of the condition had increased.

"I just wish that it had come to be under different circumstances," she said.

"I hope that I don't continue to get people asking me questions such as, 'What's wrong with your daughter' now - I think it's probably going to be a little bit more recognised, because it's in the news so much."

While Mrs Hartley's daughters did have serious health problems, she said people often assumed they weren't 'in there', because they were unable to communicate in a typical way, instead using eye movements, grunts or even vomiting to get their message across.

"I am positive that my girls are in there, and they find their own ways to communicate with us that are a little more subtle than we're used to," she said.

For parents affected by the condition, whether as a result of Zika virus or not, Mrs Hartley said an effective support network of friends, family and health professionals was very important.

"Having that support and having everyone being on the same page, having the same expectations and high standards for the girls' care and what we want them to accomplish is crucial. I think the key for all these new moms is to find that team."

Mrs Hartley had not heard of the condition before her daughter Claire was born, but was aware that there was a risk that her third child, Lola, would have it.

"For me and for my family, it took a lot of thought, a lot of deliberation and prayer, and everything, just to make sure that we felt like whatever happened with our situation, whether our child was born typical or not, that we would be ready for it at that point."

After Claire was born, they waited four years before deciding to have another child.

"We just had the faith that whatever child was given to us was going to be the perfect child for our family," she said.

"I feel like all three of my kids have been nothing but a gift to my life."