The Justice of Bunny King

The last time I saw Essie Davis was when I watched the made-for-TV feature film Miss Fisher and the Crypt of Tears which I reviewed for this programme back in lockdown last year.

Davis absolutely owned that character, the doughty Australian detective with the great frocks, as she had for more than thirty episodes of the ABC series Miss Fisher’s Murder Mysteries in the early years of the last decade. 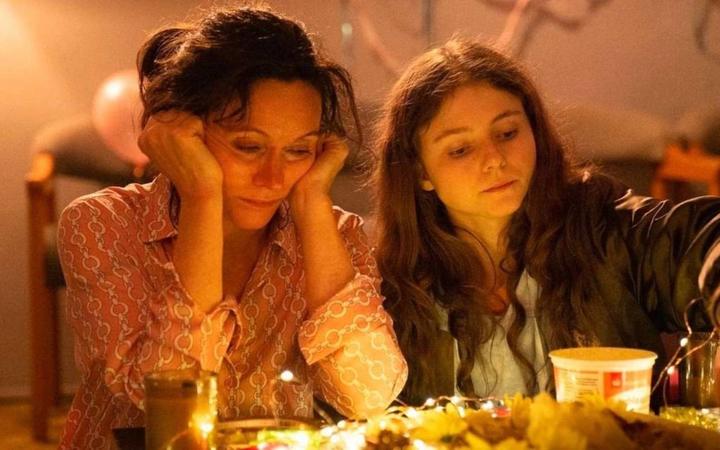 So I have to note how unrecognisable she is in the new New Zealand drama The Justice of Bunny King, directed by first-time feature director Gaysorn Thavat. She plays the eponymous Bunny with a full-throated commitment and carries the film on her shoulders.

Bunny King is a single mother living in Auckland but without her kids. She’s homeless, crashing on her sister and brother-in-law’s couch and supplementing the meagre benefit with the cash from washing car windscreens at an intersection – as it happens one of the most dangerous occupations you can find but the camaraderie amongst her fellow window washers is something for her to cling on to.

We don’t know why the state has custody of her kids, but we can guess that it must have been something traumatic because Bunny is perpetually on edge and desperate to get them back.

But to get them back, first she needs a home for them and in this crazy market? Well, tell her she’s dreamin’.

With a strong heart but with, what you might call, a distorted tactical awareness, Bunny gets thrown out of her sister’s place, but she manages to rescue her niece Tonyah, played by Thomasin McKenzie in full misunderstood teenager mode.

The pair of them hit the road to try and find the rest of the family – fostered on behalf of the state – so they can celebrate the birthday of Shannon, her youngest played by Amelie Baynes, and spend the day at the hot pools.

This rash promise, made so early in the film, at a moment of such raw vulnerability and under such pressure, is a promise that she cannot back down from.

One of the first lessons you learn as a parent is never to disappoint a child and for the most part you handle that by managing expectations, not making promises you know you can’t keep, but Bunny can’t help herself and so begins a relentless spiral into inevitable tragedy.

The film reminded me of Mike Leigh’s classic from 1993 classic Naked, which introduced the world to David Thewlis. Bunny charges through this film, on her mission, alienating everyone she meets. Now, some of these people could do with a bit of alienating, quite frankly, but some of them don’t.

Some are just trying to do their best in a bad situation and when they get caught up in the whirlwind of Bunny King, they just end up having a very bad day.

My favourite performance happens to be Tanea Heke as Trish, the supervisor at the government organisation responsible for child welfare, as Bunny’s years of frustration and pain put her on a collision course with the authorities. She’s calm and soft spoken but world weary, as if she sees things like this every day, which she probably does.

The Justice of Bunny King lets you draw your own conclusions about the root causes of all this dislocation, alienation and fracture and I wouldn’t have minded a little bit more of a steer towards the root causes – forty years of neoliberal economic orthodoxy and self-focused, anti-community, materialistic social values have left us in this state, not the rather helpless social workers or foster carers on whom Bunny vents her rage.

They are victims in all of this too, forced to reduce the people in their care to cogs in a soulless system. It’s a system that serves nobody.

The Justice of Bunny King is a great showcase for New Zealand’s women cinema makers: Ginny Loane behind the camera, Cushla Dillon as editor, Rose Guthrie’s production design and Kirsty Cameron’s costume design managed to make what might have become easy tropes of the poor interesting and colourful but still authentic.

Bum notes were rare, but I have to acknowledge them. The occasional falling back on clichéd images like power transformers, freight trains and dogs roaming free – the universal signifiers of the working class.

There was also the occasional sense from screenwriter Sophie Henderson – or maybe it's back in the bones of the story by Henderson, Thavat and Greg King – that the scales are loaded too heavily against Bunny from the start. Is there one too many trauma to overcome?

But that soon passes as the film making carries you along.