Britt-Marie Was Here is a routine piece of Swedish wish-fulfilment fluff – never the sort of film to get much push from the critics, who often damn them with the word “feelgood”.

But for some reason, I found its deadpan decency very easy to warm to. 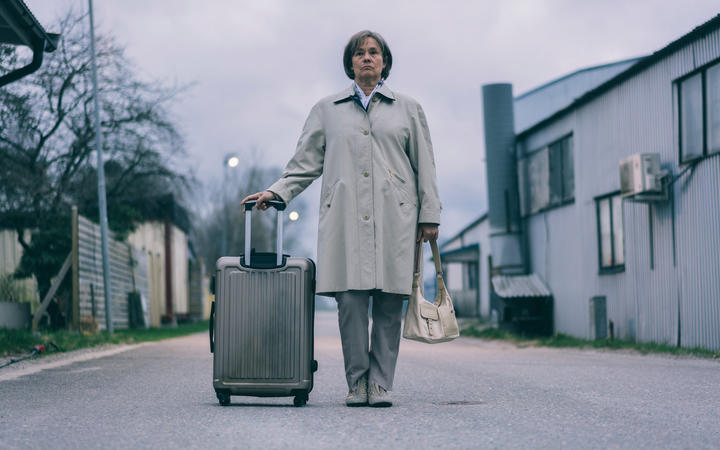 The idea of someone taking off into the Nordic wilds to find themselves isn’t unfamiliar.  We’ve already seen Master Cheng do the same thing a few months ago.

But where he was an exotic Chinese master-chef, Britt-Marie is a 60-plus housewife, who’s been tidying up around her husband Kent for years. Until she discovers Kent has been living a double life with the glamorous - if less domestic - Camilla for years.

Britt-Marie packs her bag and takes off into the countryside where she finds a job – instantly – as a youth worker in a tiny village.

All right, the plot couldn’t be more unlikely, but it shows what you’ll accept with a likable star.

Multi-award winner Pernilla August is very big in Sweden, but she’s best known internationally as Darth Vader’s Mum in  The Phantom Menace.  Here she offers slightly bewildered assistance to the eight or so kids who make up the local soccer team.

Modern rural Sweden is clearly a lot more multi-cultural than it used to be.

The wildly assorted kids, led by the perky Vega, are understandably unimpressed with their new youth worker who also – it’s part of her job description – has to act as their football coach.

Does she know anything about football? One thing she does know about is getting on with people – whether it’s Memo and Sami, who run the local garage/convenience store, or Sven, the local cop who is soon smitten by Britt-Marie’s charms.

With this rather bald description of Britt-Marie Was Here, I’m starting to wonder – as I’m sure you are too – what precisely I saw in the film.

It’s clearly not the intricacies of the plot – which boils down to Britt-Marie’s desire to be noticed for the first time in years. There doesn’t seem a lot of suspense as we count down to a football match against a far better team, with the result a foregone conclusion.

But what the film does offer is an awful lot of charm - a small, mixed community of attractive characters who offer Britt-Marie the chance to raise her sights a little higher than her usual slogan “one day at a time”.

Britt-Marie’s life has been mostly dedicated to other people’s satisfaction since childhood – as she says, it was her sister who did the dreaming for the family.

So, will she consider her contrite husband Kent’s offer of a return to her safe, limited life, a happy ending?

It’s one of the great, 25-words-or-fewer plotlines, I suppose.  “Older character discovers she can do better”.

But like all formulaic B-movies, it’s mostly in the telling.  And long before the trendy, bleak “Scandi-noir”, the Scandinavians have been telling this sort of fairy-story for years.

Britt-Marie Was Here is a Swedish-Norwegian co-production but mostly it reminded me of a Danish pastry – sweet, not too substantial, and expertly concocted.

And it’s also a reminder that the best performances allow us to go to them rather than ramming their star-power down our throats.  The final scene was so good because star Pernilla August convinced us her character deserved it.