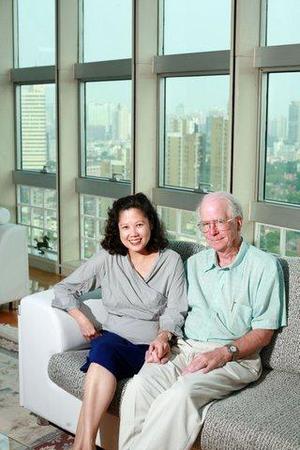 Wen and Michael Powles in their Shanghai Apartment, 2008

For four decades one remarkable New Zealand couple have worked in foreign affairs at the very highest political levels, especially within Asia and the Pacific. Last week on Asian Report we heard from Malaysian-born Wen Chin Powles, our Consul General in Shanghai from 2006 to 2008. Today we’re hearing from her husband Michael Powles, the former Ambassador to China, 1990 to 1993.

Wellington born, Michael spent a good part of his life in Samoa where his father was High Commissioner. After practicing law in Wellington Michael joined Foreign Affairs. Throughout his illustrious career Michael has been High Commissioner to Fiji, Kiribati, Nauru and Tuvalu and New Zealand’s Ambassador to Indonesia and China during the tumult in East Timor and the after-math of the Tiananmen Square massacre in 1990.

Michael retired from foreign affairs in 2001 and became founding Chairman of the new Pacific Cooperation Foundation. He was appointed Human Rights commissioner and held that position until he accompanied Wen to Shanghai in 2005. Following Shanghai he has written and lectured on issues relating to Asia and the Pacific and worked with NGOs relating to the United Nations and relations with China. In 2012 he published New Flags Flying: Pacific Leadership with Ian Johnstone.