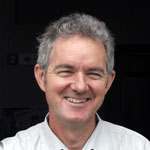 Director David Malacari (left) takes us through the just released programme, tells us how the fourth festival differs from the other three, and how he judge's a festival's success. 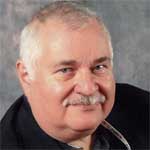 Carl Gottlieb (right) wrote one of the scariest screenplays of all time, for Jaws. He's currently in New Zealand and we chat to him about that movie and about writing scripts for the hungry but fickle Hollywood market.

Lynn talks to Douglas Lloyd Jenkins and Lucy Hammonds, two of the people researching for a book about New Zealand's fashion designers over the decades.

Pictured below: A look inside Janet Dunn's fashion gallery (below left) and Janet Dunn with her '50's styled dress made from three sleeping bags!

Sean McKenna meets some of the world's most courageous cartoonists at a conference in Wellington. 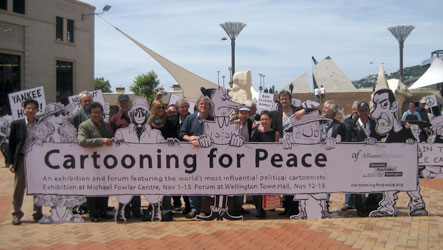 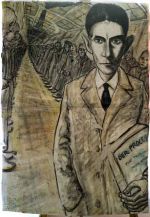 Mark Sommerset and Rowan (below right) are the husband and wife partnership behind the Cork in the Ocean and now Cork and the Bottle series for children….and Lisa Marr (below left) reintroduces us to Arthur J Rees and his acting troupe of Merry Marauders, 95 years after he released his novel of the same name

2:50 The Frangipani is Dead

Karen Stevenson (left) explains why The Frangipani is Dead, as she studies contemporary Pacific Art in New Zealand. 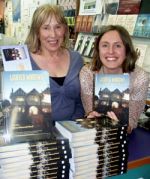