Pitcairn Island looks to boost population by luring descendants back

Pitcairn Island is making moves to bolster its dwindling population by encouraging descendants to return to live on the remote and rugged British territory. 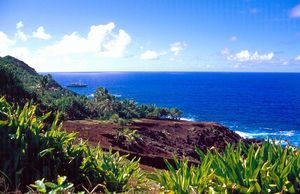 Pitcairn Island is making moves to bolster its dwindling population by encouraging descendants to return to live on the remote and rugged British territory.

The United Kingdom government wants to see Pitcairn's population increase from the 50-odd there at the moment to about 80 by 2016.

In earlier days, Pitcairn was most well known for being settled by Fletcher Christian who led a mutiny on The Bounty against Captain William Bligh in 1789. But for many now, the mention of Pitcairn Island brings to mind the high-profile sex abuse trials on the island in 2004. A seventh-generation islander, Meralda Warren, says that should now be put in the past.

MERELDA WARREN: The guys have done their time. They are trying to move on and it's about time the rest of the world moves on. We are trying to make sure that we have a postive Pitcairn and that's how we are trying to get on with life here.

Meralda Warren says the island is her home and she loves the sense of freedom of living in such a remote place. The Pitcairn administration recently conduced a diaspora survey to find out what would bring descendants back to the Pacific island.The island's governor, Vicki Treadell, the survey will help her get a better handle on what stops people returning and what issues need to be addresed.  Ms Treadell, who is also the British High Commisioner to New Zealand, says the island is small but beautiful and offers a unique lifestyle.  But she also acknowledges Pitcairn has some drawbacks and is not for the faint-hearted.

The island's immigration officer and soon to be deputy mayor, Brenda Christian, says she receives a lot on enquiries but there is not much follow through. Ms Christian was born on the island but spent over 25-years living abroad before eventually returning home.

BRENDA CHRISTIAN: I have always wanted to come back home. In all my time away, there has always been that little hankering at the back - you know home is where the heart is and finally over the years I made my mind up that was it and I pulled lock, stock and barrel so that we came down and moved here.

A Pitcairn Island-based novelist, Nadine Christian, who grew up in New Zealand, writes romance stories set in the rugged and isolated island. She likes living in such a close community.

NADINE CHRISTIAN: You could work in the store and not have enough money for flour and milk and maybe you go home with milk and you get home and on the doorstep there would be some flour for you. It's like a very small town and I try to put of that into my writing.

Nadine Christian says recruiting more people to the island is a good idea as most Pitcairners are worried about the island's small population.