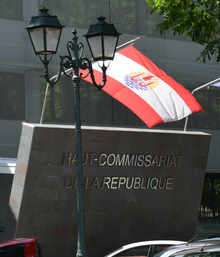 The handling of court documents in French Polynesia has stirred controversy in two cases this week and cast a shadow over the judiciary.

In one case, an apparent clerical glitch allowed a mayor on the island of Raiatea to stay in office with impunity despite a sentence from France's highest court.

In another case, a top magistrate has been referred to police for alleged irregularities committed before the court of appeal was due to open the trial of the territory's president in a massive corruption case.

For a long-time observer of the legal machinations around the territory's mainly pro-French leaders, the lucky escape of Cyril Tetuanui is no major surprise. For years, the mayor of Tumara'a on Raiatea fought corruption charges, taking his 2008 conviction in Tahiti all the way to France's highest court. It found however last year that he and his wife were guilty of abuse of public funds. Alex du Prel, the publisher of the Tahiti-Pacifique monthly, says the verdict was well known last year, but not enacted.

ALEX DU PREL: You're in a bureaucratic society. The court ruling has to go through an official channel, to be sent to Papeete, to the appeals court, who then sends it officially, that means sends a guy who crosses the road to give it to the high commissioner, who then executes the sentence. But apparently they forgot to cross the road, so it stayed somewhere at the bottom of a pile.

The pro-independence politician, Jacqui Drollet, asked the French justice ministry weeks ago why the mayor was allowed to stay in office. An answer arrived from the French High Commission recently, tersely saying the sentence was void because the verdict was not sent through within one year. He has now asked for the justice minister to investigate how this happened. Allegations of possible political interference in the background were rejected by the mayor's wife, Lana Tetuanui. She told the public broadcaster that for more than a year, the Socialists have been in power.

LANA TETUANUI (TRANSLATED): In France today, it's after all the Socialists who are in charge, they are at the head of our French government. Jacqui Drollet supported them in the last election. We supported the UMP candidate. I cannot see how and at what point they have the right to speak of an arrangement.

Lana Tetuanui, who is a member of the ruling Tahoeraa Huiraatira Party of Gaston Flosse, was spared an ineligibility sentence and re-elected this year. She is also a former vice-president of the territorial assembly, who in 2004 was central to a crucial episode in the territory's political history. After the new government of Oscar Temaru had lost a no-confidence vote, she defied the assembly president and called a sitting for a fresh election. As a court has confirmed this year, those present to elect Gaston Flosse as president included one assembly member, Noa Tetuanui, whose vote was bought. The sum in question has never been confirmed, but speculation that it was millions of dollars has not been challenged. At the time Mr Flosse was contrite and admitted to the assembly that he made mistakes.

Mr Temaru boycotted the election. Rene Hoffer was an unsuccessful candidate on the day in part because Gaston Flosse's militia forcibly stopped him from presenting his candidacy. The conclusion Mr Hoffer wants to be tested in court is that as a result, the 2004 election of Gaston Flosse was void.

The chance to test this has arisen in the appeal court.  Noa Tetuanui is part of a judgement in a huge corruption case which was to be heard on appeal this week. This follows a criminal court ruling in January which gave Mr Flosse a five-year prison sentence and a 110,000 US dollar fine for corruption as it did to a French advertising executive, Hubert Haddad. The businessman had paid about US$2 million in kickbacks over 12 years to Mr Flosse and his party to get public sector contracts from the OPT telecommunications company. Mysteriously, Mr Hoffers papers to join the case as a civil party vanished and persistent attempts to retrace them failed. Last week, however, inquiring again, a court official Nadege Controle told Mr Hoffer his file was there.

According to Rene Hoffer, a magistrate, Gérard Thibault-Laurent, then came by to warn Mr Hoffer that he was not part of the case. Mr Hoffer says the magistrate had no right to exclude his planned submission before the trial had opened. And apart from the formal irregularities, he says he was threatened, which prompted him to lodge a complaint with the police. He says he is being squeezed out of the trial for a specific reason.

RENE HOFFER: I have to be in this case because with that proof which has already been proven in the first instance, there is only something else left, which is October 25th - my auto-proclamation. So they don't want me in this case just because of this and particularly because of this.

In the political commotion at the time, Lana Tetuanui refused to open the assembly on the official election date, with Rene Hoffer using the absence of all other candidates to declare himself president. And if Mr Temaru had been voted out and Mr Flosse unlawfully elected because it was done with a vote that was bought, Mr Hoffer thinks he can force the court to formalise his self-declared presidency. But the corruption case due to start on Monday has been deferred until next year apparently as not all lawyers from Paris could make it. Alex du Prel says court cases appear to be game, with Mr Flosse' lawyers seeking delays.

ALEX DU PREL: At that time he had collusions between the state attorneys under orders from Paris. And it took 11 years from the complaint to the court case. And then when he arrived in court he had the lawyer say 'But this is an old story. It goes back 11 years. This is all forgotten. Don't sentence my client and so on.

The voting public in French Polynesia seems to take criminality and corruption in its stride as practically everybody with a conviction gets re-elected. Gaston Flosse's huge election win this year followed only weeks after two major corruption cases which both resulted in long jail sentences. With both drawn out with appeals, they don't impinge on him and allow him to stay in office. And as Cyril Tetuanui has found out, a verdict can be invalidated if the papers get lost.