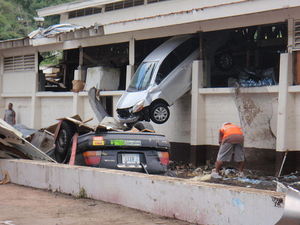 Disaster response simulation exercises are being undertaken in Nadi, Fiji over two days, as NGOs hope to ensure fewer lives are lost in the Pacific following a disaster.

Seven New Zealand aid and development agencies have joined forces to carry out the exercises, first in Vanuatu and Tonga, and lastly in Fiji.

The Pacific Programmes Officer for TEAR Fund NZ, Joy Davidson, says there are about 1,000 people involved in the  exercises in Nadi.
(Above - damage from the 2009 tsunami in American Samoa)

She spoke with Leilani Momoisea about how they hope the simulation exercises will help with disaster-preparedness.

JOY DAVIDSON: After a disaster, the impact of a disaster can be lessened by that immediate response. So the purpose of the simulation in these countries - and these three countries are very vulnerable to natural disasters, cyclones, flooding, tsunami - so this exercise is giving a chance, in a non-emergency situation, for the various response groups to practise their response, put into place their emergency plans and reflect and improve those plans.

LEILANI MOMOISEA: So you're not expecting it to be perfect, I suppose. It's more just to see how prepared people are and then perhaps make changes.

JD: Absolutely, yeah. And it's not really about testing the people, but we're wanting to test the plans. So all the communities involved have their own community disaster committee plan, schools have their plan, and I guess also a big thing after a disaster is co-ordination. And so a big part of this exercise, I guess, is testing the communication lines. So we've had an emergency operations centre, an emergency operation, set up, a national disaster management office set up, so all our calls during the next two days are going through them as they would a normal disaster, just to see where the communication breakdowns might be happening.

LM: And how is this going to ensure that fewer lives are going to be lost following a natural disaster?

JD: I think it's just going back to that the first 48 hours after a natural disaster are the most critical in terms of saving lives. And so improving the response of those people who are at the front line during that time is what's going to make the biggest difference, as well as the community. Some of the communities here get cut off, and the having an opportunity to activate and implement their emergency plans, practise their first aid, that's going to build capacity within those communities to be able to respond in those first crucial 48 hours.