Veteran pilot says the aircraft gifted to Tonga by China is not a significant safety issue. 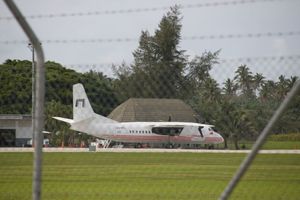 The chief executive of Samoa Air says he doesn't believe there are significant safety concerns surrounding a controversial plane flying in Tonga.

Chris Langton, who is also a veteran pilot, has been asked to help test the plane, the China-made MA-60.

New Zealand has suspended more than US$8 million of tourism aid to Tonga until the plane's safety is certified to an international standard.
(Above - the MA-60 China gifted to the Real Tonga airline)

The aircraft has been flying between Nuku'alofa and Vava'u since August, and China is adamant it is strictly verified by its own aviation standards.

Mr Langton told Leilani Momoisea why he thinks the dispute between Tonga and New Zealand is a 'storm in a teacup'.

CHRIS LANGTON: Recently, there's an oversight group that's been established called 'SPAS'. And it's through that organisation that a formal approach has been made through the Tongan government with the purpose of being able to carry out a series of flight tests and checks sufficient to allow both New Zealand and Tonga to compare notes, and then on that basis have the aircraft accepted into service without any restrictions. So that process has reached a point where they needed a test pilot to be involved. So I've accepted that role. At the moment we're just waiting for the paperwork to come together and hopefully we'll be off to China to start the validation process.

LEILANI MOMOISEA: You've been quoted as saying that the dispute between New Zealand and Tonga is a 'storm in a teacup'. What do you mean by that?

CL: I don't think it's a significant air safety issue. I'll put it that way. The aeroplane has proved itself in a number of very difficult locations, places like Nepal and Central Africa. These are areas where flight operations are fairly testy, so it doesn't necessarily mean that much in terms of some of the incidents that have been quoted in the press. All we can say is that from face value, having looked at the aeroplane from a flight operations point of view, it seems to me to be a pretty good aeroplane. I say a 'storm in a teacup', I think there doesn't seem to be any significant issue there that's going to impede the progress.

LM: So in terms of people with their worries about using the plane in Tonga at the moment, the Mormon church has told people not to use it. Would you say that's fair enough until it gets that extra safety tick-off or do you think that people could be quite confident in using that plane?

CL: Yeah, look, it's a difficult situation for both parties, really. They've come to a point where perhaps this could have been best sorted out before it came to a head. If you were flying anywhere else in the world - in Russia or Central Africa or somewhere else - and when you walked on to the tarmac there was an MA-60 there you wouldn't stop and turn around and go back. But we fly on all sorts of aeroplanes on different registrations around the world. I think here, because it was a bit of a focal issue, I don't think either party can be blamed. Let's just accept that perhaps it should be have been sorted out a little earlier in the piece.

Chris Langton says the group doing the testing is recognised by the International Civil Aviation Organisation and he expects New Zealand to accept their findings. The validation process is expected to take three and a half months.