Legislation drawn up in PNG to address passenger ship safety

The National Maritime Safety Authority in Papua New Guinea is confident revised legislation and greater education of the shipping industry will help avoid a repeat of the Rabaul Queen tragedy. 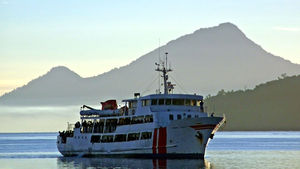 The National Maritime Safety Authority in Papua New Guinea is confident revised legislation and greater education of the shipping industry will help avoid a repeat of the Rabaul Queen tragedy.

At least 162 people lost their lives when the ship sank in February last year off the coast of Morobe province.

A Commission of Inquiry into the disaster was highly critical of the ship's owner for allowing passengers to travel in appalling conditions and said the ship was overloaded.

It also viewed the agency as having not fulfilled its obligations and called for the Merchant Shipping Act to be reviewed.

CHRIS RUPEN: The IMO sent out a team to help us draft a new merchant shipping bill. The IMO are working closely with the Australian Maritime Safety Authority to do this and the work started. Only two weeks ago we received the first draft of the revised Merchant Shipping Bill. We hope that the work will be concluded by December this year.

BRIDGET TUNNICLIFFE: What will be the major features of that change in legislation?

CR: OK, there are really a number of omissions in our existing act, such as the provision for a coastal passenger ships category which will be included to ensure that the best international standards for passenger ship design, safety, stability and safety management are contained in the new legislation.

BT: Does that include outlining that ships shouldn't exceed passenger limits?

CR: Yes, yes. And also safety measures to be incorporated in terms of increased life raft capacities and number of lifejackets for passengers.

BT: So currently is there anything written in legislation in Papua New Guinea that spells out that ship-owners are not allowed to allow passengers to board which exceed the number for which the ship has been certified?

CR: There is legislation to that effect. It is left entirely to the NMSA to police that, but it is also the ship owner's responsibility to ensure. If you look at our set-up the head office is in Port Moresby and we have field officers in six places. On top of that we have eight ship inspectors and on our ship's register we have about 750 vessels on the domestic register.

BT: So this legislation does exist, but you're saying that a lack of resources and manpower means it's very hard to enforce and ship-owners are just flouting it all the time?

CR: Yes, human resources are very limited. The marine personnel that it requires, it's quite a challenge to attract and retain these people, given the challenges caused by the major development projects which we are competing with to attract the main personnel that we require. But as we move forward, we are looking into how best we can attract and retain the qualified people that we require.

BT: Is that going to improve at all under this new legislation or is it simply a matter of getting more government funding so you can get the resources you need?

CR: I see it as improving under the new revised legislation, because at the moment the legislation, it does provide for these things, but in order to assist us in policing the legislation, at the moment we put out circulars to the industry which do not really have a legal authority. What we would like to put into the new revised legislation is something like the marine orders which they have in Australia, which have the effect of law, so the CEO of the National Maritime Safety Authority can issue... Of course subject to checks and balances, but the marine order should be probably the way to go.

BT: What are the punishments if a ship-owner is caught allowing their ships to be overloaded? What are the deterrents?

CR: It provides both for monetary fines and also jail terms.

BT: How often would you apply these kinds of punishments?

CR: We are applying them at the moment, but of course there are areas that these fines and penalties do not serve as a deterrent because the ship-owner would prefer just to pay the fine and get away with it.

BT: So do you believe you need to introduce stiffer fines and penalties so it actually acts as a proper deterrent?

CR: Steeper fines and penalties and also maybe more education and awareness through the shipping industry in this country on their roles and responsibilities, because we believe in NMSA that safety is everybody's responsibility.

BT: So you would accept that currently a lot of ship-owners are still allowing their ships to be overloaded?

CR: Yeah, we've stepped up our resolve to make sure these things do not happen and I think people are beginning to pay attention.

BT: What would you see as the number one barrier to making sure ship-owners don't overload their vessels with passengers? What is the main issue?

CR: That's a very good question. I think it's really the lack of shipping services in this country to the most remote island communities. I think it offers an alternative, a cheaper means of getting... cheaper than the airline fares. And people will continue to go by boats. And one way of making sure that passenger vessels are not overloaded is just control on the part of the National Maritime Safety Authority, and also for the companies that operate these vessels. Of course, the bottom line is profit, but I think the safety of everybody is paramount. Let me say that a lot of ship-owners in this country are responsible people. I think there's only one or two that would like to cut corners and they compromise safety in some respects.