The 29 said they were being exploited by their employer, JDA, a company contracted by the Australian government for $US30 million. 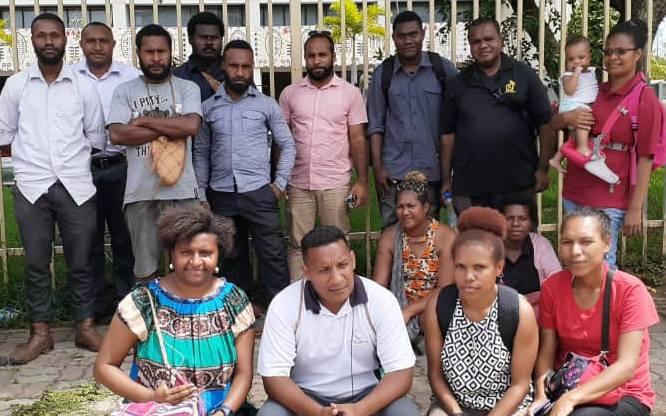 Some of the disgruntled JDA workers Photo: Refugee Action Coalition

Eleven of the 29  had their employment officially terminated by JDA last week.

Eighteen agreed to reinstatement in order to feed their families but without a pay rise.

A spokesperson for the 29, who did not want to be named, says an invoice for wages sent to Australia's Department of Home Affairs was accidentally uploaded onto a JDA shared drive for all staff to see.

"So when we saw the contract and when we compared it to what we are getting, they are retaining 90 percent and they are just paying us 10 percent."

The 29 sort to negotiate with JDA but were told they were being paid in accordance with market rates.

"But that's not true because compared to the market rate, it is far less than the market rate and we know that the JDA is making millions of dollars through this project but just like the refugees, we know that hey are also not looking after them well and also the staff, we really work out backs off to ensure that what they say, whatever instruction, whatever thing that needs to be implemented as requested by Home Affairs we implement them but they have treated us very unfairly especially the PNG nationals."

JDA made headlines last year when former staff alleged the company was not equipped to fulfil its contract.

Former staff of an associated company also told the ABC that JDA employees had been instructed by managers to falsify their records.

"JDA is the subject of an Australian audit investigation because of the allegations of rorts in order to meet Australian contractual obligations. The Australian government has known about that for a year. They know about earlier cases where a whole lot of JDA workers, the PNG nationals resigned because of allegations of racism from JDA management."

JDA's parent company Applus referred questions to Australia's department of Home Affairs, which did not reply to a request for comment.

Nor did the PNG government whom the former JDA workers petitioned last week to remove the contract from the company.

Only about 200 of the 1500 or so refugees Australia detained in Papua New Guinea in 2013 remain there.

Now in Port Moresby hotels and rental accommodation, the refugees and their support staff deserve better treatment from Australia, according to Mr Rintoul.

"We think it's still quite urgent that he Australian government acts to get the refugees resettlement, to bring the people from Port Moresby to Australia where they should have been but in the mean time the Australian government should be making sure that the money is actually going to the people that it's meant to provide. Case managers and the office support workers who are working for JDA should be being paid properly. The PNG government should be insisting on that."

Refugees spoken to last week said they were frustrated by the the loss of support but sympathetic to the workers plight.