An IT specialist says it's a tragedy that Māori and Pacific people only make up two percent of the technology sector in New Zealand.

Dan Walker says the percentage is low considering that Māori and Pasifika form 25 percent of the country's population.

Mr Walker says there are several barriers as to why the number is low including poverty. 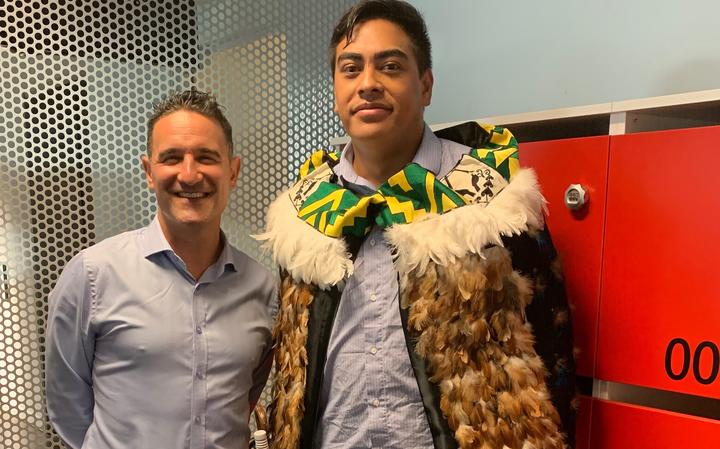 Dan Walker will be mentoring Dylan in the Cloud Solutions team at Microsoft NZ. Photo: Supplied

Dan Walker is an IT specialist for Microsoft and has researched into what the barriers are for Māori and Pacific getting into the technology sector.

Mr Walker says poverty is a huge barrier as it restricts access to technology, thus making it difficult for them to excel.

He says library use in South Auckland is high and the reason for that is to access the Internet.

"Library access in South Auckland 30 percent of our tamariki [children] had access to WiFi, so they were going to the libraries to get access to that. That is a core fundamental requirement around getting tech savvy and the adoption of technology is even just some of those basics having access to WiFi."

Mr Walker's research is called 'Tikanga Māori ki te ao Matihiko or Māori Values as a Framework for Digital Leadership' and he says it relates to Pacific people as well.

He says having no role models in the technology sector is also a barrier.

"If you're growing up and your auntie and uncle or your dad, your mum are all using technology, they're technology savvy, then you also learn from those role models and also seeing tech role models in the space as well. At the moment a lot of our technology role models are some of the global ones. Jeff Bezos or our Facebook, they're not actually Maori or Pasifika role models."

Dylan Apera is currently finishing his bachelor's in network engineering and IT service science at the Auckland University of Technology.

He is also an intern with Microsoft and says the tech sector lacks Pacific role models so he has had to look internationally for inspiration while growing up.

"There's not enough role models in that space, so for me when I was growing up rugby was a big thing because we had the likes of Benji Marshall, Sonny Bill Williams and everyone sort of went towards that because there were people that they could see as their own and that they actually aspire to be."

Mr Apera went through Tuputoa, a network which help Māori and Pacific get into internship programmes in New Zealand companies.

He says it required him to step out of his comfort zone and attend a lot of networking events to build his confidence.

"I went through the multiple trainings and leadership courses and I gave them three values I was really huge on, and so that was community, culture and the environment and it just so happened that my values aligned with Microsoft."

Tuputoa's research shows that only 17 percent of New Zealand's top 60 firms have an executive who identifies as other than European/Pākehā.

Mr Walker wants to see changes in the environments of corporate New Zealand.

He says leaders in the IT sector need to work on positively discriminating towards Māori and Pacific and actively going out and seeking diversity for their companies.

"We need to focus on trying to purposefully going out there and pull them in because for a lot of Maori and Pasifika they don't always like putting themselves out there [Dylan is exceptional], but a lot of our whanau just see the tech sector as something that's just too far for them."

He says that by having Māori and Pacific and other ethnicities, it allows for more diversity of thought in companies.

"There was a study put out by Harvard around the diversity of thought that you're 40 percent more likely to come up with more innovative solutions that you have not thought of before if you have that boarder diversity of thought, so we don't want just more of the same people rolling up to leadership positions who think the same. We need people who have those different world views to be able to come in and bring those."

Currently there is no NZX listed company who has a Māori and Pacific CEO.