Pasifika boy humiliated over his size by Australian rugby officials

An 11-year-old Australian boy of Cook Island Māori descent has been left in tears after he was pointed out as "the big kid" and called to get off the field in the middle of a junior rugby tournament in Sydney this month.

Leo Farr's mum is now calling for better communication from the Sydney Junior Rugby Union in an attempt to stop this happening to other children in the future. 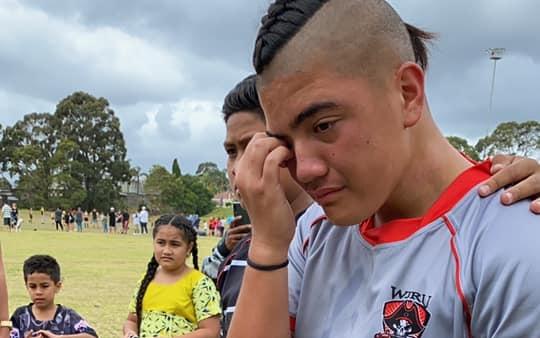 Leo after being told he's too big to play. Photo: Supplied

Three weeks into an eight-week tournament, Leo Aotearoa Tuainekore Farr was singled out in front of his team-mates and more than 100 spectators when officials ordered him off the field because he was too big for his age grade.

Leo's mum Ayla Hinekiteao, who posted a video of the incident on Facebook, says she is disgusted at how the situation was handled - especially as it involved children.

"To be told that you can't play in your own age group because you're pretty much too big is disgusting. What about those who are wanting to go and play with their mates and that want to play in their own age group? I think that needs to be brought to light within the clubs and within rugby itself... I really hope it doesn't happen to any other kid out there because it is traumatising," she said.

Prior to the tournament, Leo's ability to play in the Under 11 and Under 12 grades for his school was reassessed after a complaint from another parent.

Leo, who is 174cm tall and weighs 86kg, was cleared to play but after the school holidays but his mum insisted Leo undergo another assessment to prevent any sideline issues.

Recommendations were then made that he play a grade higher, but because he was already playing Under 12s at school, there was no requirement for him to be assessed.

However a dispensation was sent to the Sydney Junior Rugby Union for their records.

Leo has played rugby league since he was four but has only been playing rugby for three years. Ms Hinekiteao says she was not aware that he could not play in an under-11 team.

She says the dispensation was done purely for representative trials at his school and if there were any issues with him playing in the same grades for his club, they should have been notified much earlier.

After a video of Leo getting sent off the field was posted to Facebook, Leo and his family have been inundated with support from around the world, but all his mother wants is an apology and an explanation from the New South Wales Rugby Union.

"There was no apology. He's [SJRU chair Anthony Hunt] just gone and said 'ok, let's talk about the media side of things. Are you willing to take it down [the Facebook post] and we can sort this matter out.' But then also asked me, 'if you're willing to put the post down...' As soon as he said that to me I thought 'well hang on a moment, do you really care about Leo's welfare here, or are you trying to maybe I don't know trying to cover yourself up with something'."

In a joint statement the two rugby unions said they were aware of the matter and would be working with the parents and clubs to ensure there was a place for Leo to stay involved in the game.

"While it is not NSWRU or SJRU intention to prevent any player from participating in rugby, the player involved had been previously assessed in accordance with the policy and it was deemed he was required to compete in an older age division. Despite several attempts to get in contact with all those involved, the matter was then required to be addressed at the competition in person. We recognise that perhaps further attempts could have been taken to speak to all those involved."

Since then, Leo has continued to support his team from the competition sidelines but whether he continues to play rugby in the future is still up in the air.

This is Talei Anderson.