The caretaker president of the Marshall Islands says it's unconscionable that the United States kept secret key information about its nuclear tests for decades.

New details reveal the US withheld information about the nuclear waste it left behind when the Marshall Islands gained independence, and the extent of the tests it carried out.

Now, a dome that contains hundreds of tonnes of nuclear waste is at risk of crumbling into the ocean.

But with Washington increasingly jittery about China, the small Pacific country's finding it might now have some leverage to get something done. 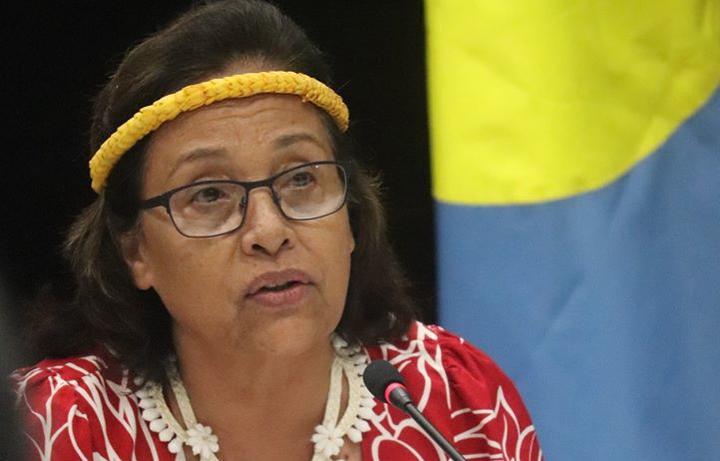 Enewetak was once a paradise - a long atoll in the clear blue waters of the north Pacific, white sand and thick green palms.

Today, it's rutted with scars, after the US detonated dozens of nuclear bombs on, in and above it in the 1940s and '50s.

Whole islands were vaporised, deep craters carved into the coral.

Jack Ading is a senator from Enewetak. His family was forced to move for the tests, and then allowed to return in the 1980s.

"It appears that when we moved back to Enewetak in the 1980s after we were assured by the US government that it was safe. We were actually subjecting ourselves to a risk that we were never warned about."

Government documents reveal that beyond the nuclear blasts, the US also tested biological weapons, including an aerosol bacteria.

But this was kept secret when the people from Enewetak were allowed to return, and other documents show that people were subjected to tests and experiments about the lingering effects of radiation.

Last week, the Los Angeles Times also uncovered that the US didn't tell the Marshallese it had shipped 130 tonnes of soil from its atomic testing grounds in Nevada in 1958 and dumped it at Enewetak.

The caretaker president of the Marshall Islands, Hilda Heine, says the new details are disturbing.

"To say the least you would have thought that all that information would have been shared with the Enewetak people before they went back to Enewetak. It is unbelievable that such information was held back, and as a result people have gone back and lived there for many years."

The nuclear waste from the era is stored in a pile at the end of the island of Runit, covered in a concrete dome.

But a recent study by the Marshall Islands Nuclear Commission found the dome is now at risk of collapsing, and as rising seas erode beneath it, much of that waste is seeping into the lagoon.

The commission's chair, Rhea Moss-Christian, says information about the dome and the testing era was withheld throughout the independence process, while a compact of free association was negotiated in the 1980s.

"We signed the compact in 1986 on the understanding that we had all the information we needed to have. It's pretty hard for us to see this information, to have the level of detail that we now have, and to think that any of those previous agreements could stand."

The Marshall Islands has sought US help to clean up contamination and to shore up the dome, but American officials have declined, saying it's on Marshallese land and, therefore, is the Marshall Islands' responsibility.

A Nuclear Claims Tribunal formed by the two countries in 1988 concluded that the US should pay $US2.2 billion in claims and settlements.

But documents from both the Nuclear Commission and a 2010 US House inquiry show only $4 million has been paid.

Last month, the Marshall Islands parliament - the Nitijela - endorsed a Nuclear Commission strategy which calls for, among other things, full compensation, better healthcare, and environmental protections.

The US maintains it is upholding its responsibilities.

It says it's paid nearly a billion dollars, which has gone towards resettlement, rehabilitation and healthcare costs for affected communities, and that it's funding tests of the water and atmosphere around the Runit dome.

But Giff Johnson, the editor of the Marshall Islands journal and an author of books about the nuclear legacy, says that's not enough.

"People want justice for Marshall Islanders. The US government has to step up and address issues that it has addressed for American victims but is ignoring out here."

For the Marshall Islands, a smattering of atolls in the North Pacific - population 53,000 - it might be an opportune time to twist a superpower's arm.

Washington is increasingly nervous about a growing Chinese presence, and the compact of free association - which guarantees relations and funding from the US - expires in three years.

Having initially maintained there won't be a replacement compact, Washington is now keen to open talks for a new one, and has sent a string of high-ranking officials for visits.

The caretaker president, Hilda Heine - who a few months ago was invited to the White House to meet President Donald Trump - says that could bode well.

"The geopolitical situation in the Pacific is really helpful to the cause of the Marshall Islands. The US is now paying more attention to the Marshall Islands, so our issues around climate change, around our nuclear legacy, I think those will come to the forefront of our discussions going forward with the United States."

Whatever comes from those discussions, the people of Enewetak want more than they're getting now.