Rescuing asylum seekers from Papua New Guinea's Bomana prison is the aim of a group privately sponsoring the resettlement of refugees in Canada.

About 50 asylum seekers, formerly detained on Manus Island by Australia, have been locked away in Port Moresby's Bomana for three months. 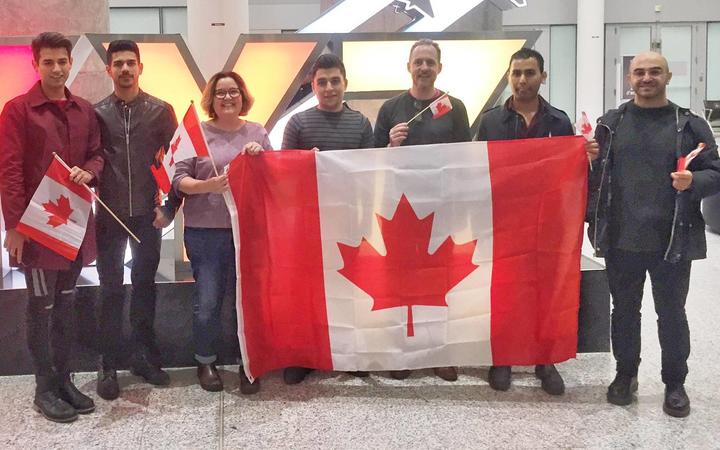 Amir Sahragard (centre) is welcomed by supporters at Toronto airport. Photo: Ads Up

About 75 asylum seekers remain in PNG, where they're known as non-refugees or negatives. About 200 other men recognised as refugees are also still there.

Many of the negatives refused to apply for refugee status. They didn't want asylum in a developing country where they were forcibly moved six years ago after landing in Australia.

One of them was Amir Sahragard, who arrived in Toronto last week with the help of the group Ads Up or Aussie Diaspora Steps up.

The 27-year-old refugee from Iran says he's spoken to men released from Bomana after they agreed to return to the country they fled.

"They call it detention centre, but Bomana it's worse than prison. They are without contact are not allowed to have visitors, they're doing bodies naked body search, they're giving them only one meal in a day. Their family are desperately worried about them and contacting lots of people to ask what's going on where are their sons, where are their husbands. I had lots of stress that they might come and take me any time to that prison."

Ads Up spokesperson Stephen Watt says Bomana is the next level of cruelty for Manus Island men.

"And the Canadian private sponsorship programme is the only hope they have for ever getting out unless they volunteer to go back to their own country which is often a different kind of death sentence."

Mr Sahragard says he doesn't believe Australian government claims that it has no oversight of Bomana.

"They're saying that it's not their responsibility or this is not what they are doing. But I know and I'm sure that it's order from Home Affairs of Australia that send them there.

"There are 18 people who are in also danger to be sent to there. I am in contact with them and they are really, really worried, and it might happen anytime, any day. It's really the most scary thing that you can imagine."

Mr Watt says Ads Up is bringing another negative to Canada today and has raised enough money to apply to resettle about 15 more refugees from Manus Island and Nauru.

"There's a lot of funding coming in, actually from Australians, of all people. Perhaps they see the harm that's been done to these guys and I don't know if it's a guilt thing or... If people think the Australian refugee policy is horrendous and inhumane and brutal, it's just a very important lesson that you have to distinguish the government from the people that it represents. They're often very different."