The Tongan community appears divided ahead of this weekend's clash between the Tonga Invitational XIII and Great Britain in Hamilton.

The dispute has cast uncertainty over whether supporters, dubbed 'the world's best fans', will be out in numbers this weekend. 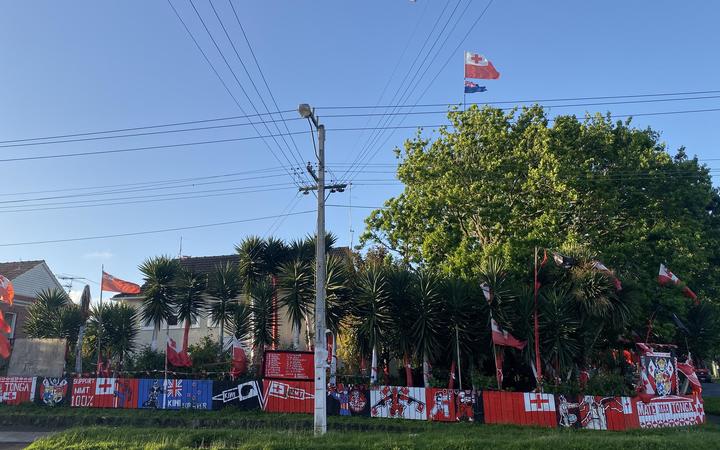 Two years ago, you couldn't escape the sea of red. Tongan flags were sold-out in shops and fans were flooding the streets of Auckland.

But co-founding member of the Mate Ma'a Tonga team, Will 'Ilolahia, says there's a tangible change in support for this weekend's clash.

"The vibe is no longer there, there's not as many red flags and red cars flying around the place and tooting their horns and all that. It's not there like it was in previous years."

"Our community is divided because we are loyal to the players you know, the players have actually extended our status more so on the global scene and our fans have earned the best fans in the world number but at the same time our people, when they know the truth they start to question it and I think that's what's happening."

For the first time since the team's inception, 'Ilolahia says he won't be watching the game live.

Chair of the Auckland-based Tongan Advisory Council, Melino Maka, agrees with 'Ilolahia, saying some will attend but not at the level they've seen at past events.

"They thought because they have the Tongan star players and they thought regardless of what they're doing that the people will still turn up."

"People will turn up to a Tongan game if a Tongan national team is playing. This is not a Tongan game, this is a game organised by the International Federation."

But community leader Manase Lua - who has been following the team ahead of their campaign - says support for the players is still strong with many of the Tongan community attending a Kava ceremony in Hamilton this week.

"It was a great vibe. If you look online, social media, those of you who can read Tongan actually, the vast majority of people who comment from New Zealand and even overseas fully support the boys.

"They understand that it's not their fault that these politics happening have caused a riff and a  divide, they are just there to support the players.

"The players are here. The fact is they're playing and they're Tongans, so they will be there to support in force."

Lua says the controversy may have caused a split but the team still needs support.

"The fact is, the boys are here. Tongans should put the politics aside, let that sort itself out and come out and support the boys.

"They're Tongan, they're playing in red. They're here to play for the country and the cause and Tongan's should support them - they're still the same team that were here last year."

After their game against Great Britain, the Invitational side will play Australia the following weekend in Auckland.