A small undersea volcano and previously uncharted rocks and reefs feature in the 30,000 gigabytes of undersea data the New Zealand High Commission in Nuku'alofa presented to Tonga's government last week.

The data is the culmination of a hydrographic survey of the Ha'apai Group's sea-floor, the first since the late 1800's. 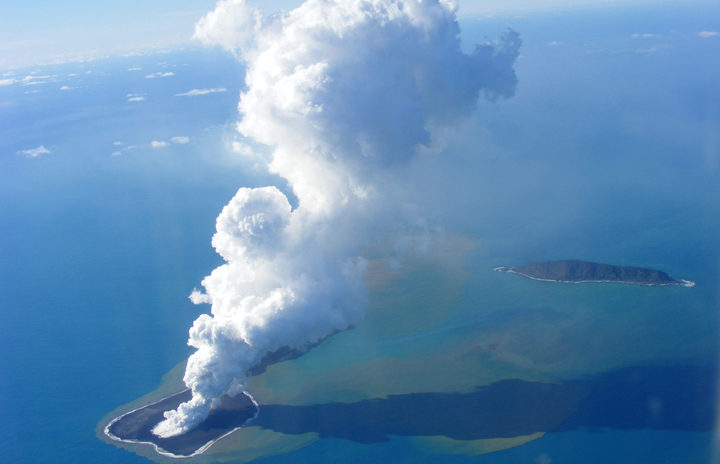 A 2009 aerial photo of ash rising into the air from an undersea volcanic eruption. Photo: AFP / Telusa Fotu / Matangi Tonga

The submarine mapping is part of a larger project called the Pacific Regional Navigation Initiative which began in 2015 between Pacific governments and New Zealand's foreign office MFAT, which funded it.

"In the Ha'apai Group of islands in Tonga which is opening up an area safe for the cruise industry to have an alternative location to go and visit within the Kingdom. That's been the main driver for the survey."

He says beyond safety and the stimulus to tourism, sea level changes were documented with the tide gauges that were installed.

"To be able to record the tide levels and sea level throughout the course of the survey. So that data can then be used to understand how sea-levels have changed over time and having a historic record of the information then helps build a picture of what the sea-level rise is like and happening in certain areas."

Ha'apai's submarine topographical survey ran from November 2017 to December 2018 providing the raw data for what was handed over last week.

"Having a very detailed picture of what the sea bed actually looks like - so it's a bit like having a topographic map but covered by water basically. So, knowing the shape of the sea floor helps determine what's the effect of inundation from tsunami as well."

Mr Caie says the data gained from this survey - the first since what was done by rod, line and sextant in the 1890's - also improves ecological knowledge for the Tonga government.

"We're discovering reefs that maybe haven't been shown before and then all that information helps government, of Tonga here in particular, to try and understand what is the marine habitat that lives on these structures and then help to have their decisions around how do they protect and how do they monitor those sort of habitats."

He says it will be combined with other recent survey work and provide modern mapping updates and six new charts for Tonga's coastal areas.

"It's not all of Tonga that was last surveyed in the 1890's. Tongatapu and Vava'u have been surveyed within the last 5 years - 10 years, still fairly recent.

"So this is really one area where we needed this new data to create these new electronic charts that then can used on the onboard navigation systems of the cruise ships navigating around the area."

Stuart Caie says Tonga's the new nautical charts will be ready by March.

He says work in Cook Islands, Niue and Tokelau has been completed and work in Samoa is at a preliminary stage to establish how coastal areas are currently used for commercial and recreational vessels of all sizes.