Mauna Kea protests in Hawaii show no signs of abating

Protests demanding a halt to the construction of a giant telescope on Hawaii's tallest mountain show no sign of abating.

The so-called Mauna Kea movement created ripples across Pacific, with Māori in New Zealand rallying in support of the cause. 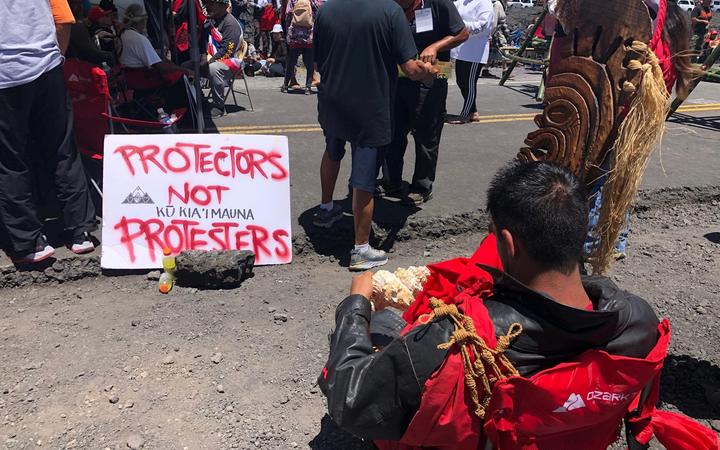 The protest at Mauna Kea has been on-going for the past week. Photo: Supplied

Now into their second week of blockading Mauna Kea, protesters say they will never back down.

But with the government maintaining the $US1.4 billion telescope will go ahead, the mountain's future is unclear.

Construction on Mauna Kea - considered sacred to many Native Hawaiians - was due to begin a week ago, following a Supreme Court ruling.

Protest leader, Kaho'okahi Kanuha, says the number of people turning out in opposition to the Thirty Metre Telescope, or TMT, is growing by the day.

Organisers believe about 2,000 people are blocking the mountain's access road, where a makeshift camp has been created.

Mr Kanuha says the protest movement has been strengthened by people rallying across the world.

On Monday, dozens of people rallied in New Zealand, as Māori came out to show solidarity for the Mauna Kea protests.

"I think it's really important that as people of Polynesia, that as Māori, we come out and we support Kanaka Maoli on these kinds of issues. It's critical in this day and age, that as indigenous peoples we band together globally to support each other and the protection of our sacred lands."

University of Hawaii associate professor Noelani Goodyear-Kaopua says the cause has resonated around the Pacific.

"All over the world in all kinds of ways we're having to say enough is enough. If we don't protect places that sustain us, then we're not going to be here anymore."

Still, in Hawaii's closely-knit society, some families have been divided, with police and protestors often related.

Dozens of protesters were arrested on Friday as the governor warned police would have more freedom to move equipment up Mauna Kea.

But Noelani Goodyear-Kaopua, who also attended the protests, says many police are playing a reluctant role.

"For the law enforcement officers, they really have to do a lot of soul searching about why they're on the side that they're on and I know, many of them have expressed privately that they really don't want to be there."

He says over the weekend he saw and treated families at a hospital who were "beyond exhaustion" from their time on the mountain.