About 5,000 tonnes of the mineral bauxite has spilled into a bay in Solomon Islands where a bulk carrier ran aground earlier this year, spilling thousands of litres of oil.

The latest spill at Rennell, near a World Heritage Area, has locals suffering again, drawing renewed criticism of the extent of mining in the country. 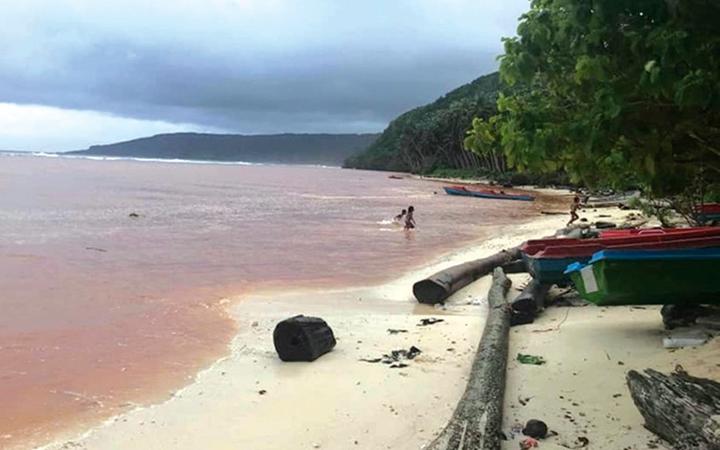 Last Monday, a barge was carrying a load of bauxite across Rennell's Kagava Bay in stormy weather, when the load spilled out.

A former premier of Rennell, Colin Singamoana, says the azure sea has been dyed red.

Rennell now finds itself dealing with its second environmental disaster this year.

In the same bay five months ago, the bulk carrier Solomon Trader became wedged on a reef as it tried to load bauxite during a cyclone.

It sat there for weeks, leaking about 80 tonnes of oil into the pristine bay, which is next to a world heritage area.

Those responsible squabbled for weeks over who should clean up, while the locals - who rely on the bay for food and their livelihoods - suffered through dead fish and thick sludge washing up on the beach.

"There's advice from the health team from the hospital around here. They advised local people not to allow their children to swim in the sea and also not go fishing because of the bauxite spill."

Colin Singamoana says the spill has compounded the devastation, thousands of tonnes of dirt smothering what's left in the bay.

He puts the blame for the bauxite spill on the miner, Indonesian company Bintan, for trying to load during a storm.

"It was negligence. The weather was very bad. The sea was not in a position that they could travel. The issue of the barge, it could be similar as well."

Mining has cut deep scars across Solomons rainforest, and landowners have been protesting for years.

In the capital, Honiara, logging upstream from the city's water intake has forced the town supply to be shut down for days at a time in recent weeks.

In the wake of February's spill, the Prime Minister at the time Rick Hou said the country had seen little benefit from the resource sector, and promised a review.

There's been an election since then, and the new Prime Minister Manasseh Sogavare has been more tepid.

But he did acknowledge the frustration in his independence day speech this week.

"The public had been criticising the government for all of this. I do acknowledge those criticisms. However, I do want to reiterate it here that protecting our environment is an individual and collective duty. We have laws in place that gives statutory powers to senior government officials."

But even on Rennell, in the wake of two disasters, the ties between mining and politics run deep.

There were provincial elections last month, and members are divided into two camps trying to form an administration.

This week, one member, Dorry Tuhaika, came out to accuse the Indonesian mining company, Bintan, of trying to bribe him with cash and a truck to form an amenable administration.

Other members have denied this.

Bintan, the Solomons' environment ministry, and national disaster office have not responded to repeated requests for comment.