He made the comments at the welcoming of a purpose-built traditional vaka designed to help island communities deal with the climate crisis. 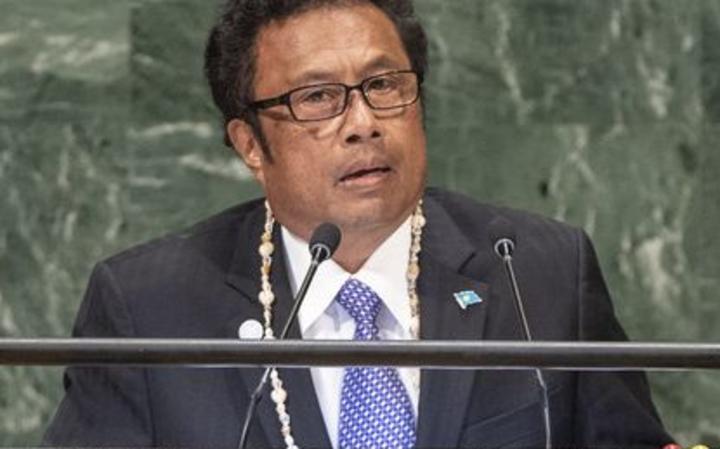 On Thursday, the Okeanos Palau, a double-hulled traditional vaka equipped with solar panels and coconut oil engines, drifted into Palau.

It had just finished a months-long 4,000-mile journey from New Zealand, passing through Vanuatu and the Federated States of Micronesia.

Crew member Samil Beouch has been away from home for five months and says they faced the challenge of cold, heavy ocean swells and storms.

"It's an experience that, you know, once in your lifetime and it seems to me, you know, the reason why few people attempt to sail out there is maybe they they can sense that."

The ship was built by the Okeanos Foundation, a German non-profit which is covering half of the construction costs, or around $US500,000.

Palau's government will take over ownership of the vessel when the other half has been recovered by the foundation.

Last week, the office of the president said the vaka would visit remote communities the country and help with disaster relief and climate change preparedness.

"You cannot just concentrate on transportation or the power plants or forest fires or whatever. You also have to do something about it before this sea ocean vessels that are really contributing to the atmosphere of global warming. And Palau is doing this already."

Mr Remengesau says the Okeanos Palau will save thousands of dollars in fuel costs and services will be more frequent.

He says it will also be used to generate profits from tours and to pay off its costs and invest in more vessels like it.

"We just feel good about the revenue generating capacity. And that money can help push the pot needed to maybe meet some of the costs. We we did not expect to just get it for free. So we want to put some money back to the funds."

Cook Islander and master navigator Peia Patai says the arrival of the Okeanos Palau on Thursday was a special moment.

"What you have here is the best in the fleet. I can guarantee that and I hope that we will, can change all the systems that we have here on the Okeanos fleets. And because it's so beautiful, you're harvesting our natural resources from the sun. And also with with coconut oil fuel is so beautiful."

Palau's call for a more sustainable approach to sea vessels comes shortly after it was frustrated over the climate crisis during historic talks in Washington.

In May, analysts pointed out climate change was missing in meetings between Tommy Remengesau and US President Donald Trump.

Marshall Islands President Hilda Heine, who was also present, later said she had saved her breath rather than try to persuade Mr Trump to take action.