Tokelau's village councils are considering a site for a runway on the atolls, reigniting controversial plans for air services to the remote territory.

Speaking at a UN meeting this week, the Ulu, or leader, Kelihiano Kalolo, also reiterated Tokelau's ongoing commitment to self-determination. 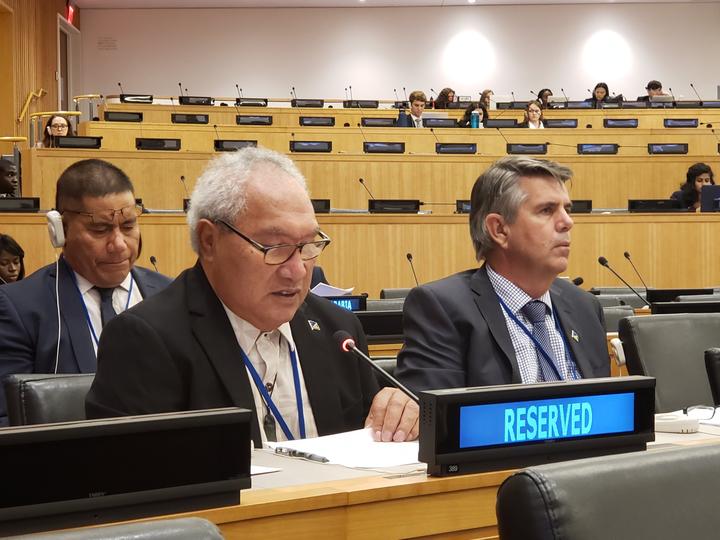 There have been plans for decades to build airstrips in Tokelau, which is only reachable by boat from Samoa.

But when Tokelau's government spent millions on two helicopters in 2016, New Zealand was outraged and the plan was shut down.

Now though, Ulu Kelihiano Kalolo says those plans are back on the table.

"We now own three boats, including an inter-atoll vessel and the ship to shore facilities have been improved and are now more safer. As I speak, the elders and the council at home are considering a site for a new airstrip to be built."

Mr Kalolo's comments came during an update to the UN Special Committee on decolonisation on Tokelau's progress toward self-determination.

Speaking at a meeting in New York on Monday, he thanked New Zealand for its increased support for infrastructure and telecommunications.

But he says Tokelau won't take the same path as Niue and Cook Islands, which both gained independence from New Zealand but kept strong ties.

"Tokelau may take a slight deviation given its emerging governance model links to the importance we hold of our customs and traditions. This is an issue which Tokelau wishes New Zealand and the committee to take up and solve."

Feasibility studies conducted since 2010 put costs at anywhere between $US1.8 million and $US13.7 million for an airstrip.

Despite the previous government's crackdown on the helicopter buy, the Labour-led coalition's Pacific Reset policy has given more priority to Tokelau.

New Zealand's administrator to Tokelau, Ross Ardern, told the UN meeting Tokelau is at the forefront of this strategy.

"Tokelau is turning its mind to future governance models. It is New Zealand's role to support Tokelau to develop a model that it considers to be fit for purpose. The model will recognize and and reflect fundamental aspects of Tokelau faith is culture and identity, while drawing upon aspects of governance models used elsewhere."

New Zealand has slated more than $US56 million in aid for Tokelau for the three-year period from 2018.

Mr Ardern says nearly $US15 million will go toward connecting Tokelau to an undersea internet cable due to be completed in 2021.

New Zealand has also commissioned a review of Tokelau's patient referrals, which determine who can be medically evacuated.

The scheme has come under fire by locals who say needing to travel to Nukunonu atoll's hospital for assessment is obstructive.

"An international firm is currently developing a coastal hazard reduction plan and will help to help two representatives of Tokelau's villages to identify and assess options for mitigating these hazards."

New Zealand's Prime Minister, Jacinda Ardern, who is Mr Ardern's daughter, has committed to visiting Tokelau before the end of her term in 2020.