A Samoan-New Zealand artist has become the first Pasifika woman to hold a solo exhibition at Wellington's Adam Art Gallery.

Dominic Godfrey went up to the gallery for a walk through of the exhibition, Double Take. 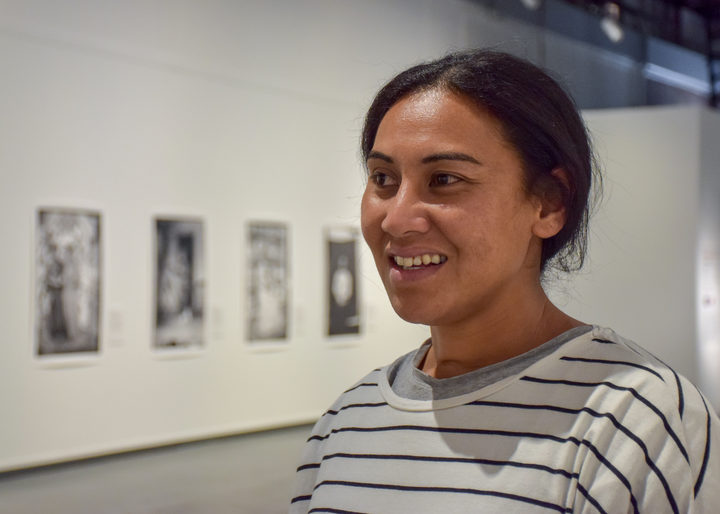 Edith Amituana'i's work documents a contemporary Pacific world with a nod to the symbols and references of classical art.

The Adam Art Gallery's director Tina Barton says showing this survey of her work allows for a better understanding of her contribution to contemporary New Zealand art.

"The more I delved into what she's doing right now, the more I realised how importantly she was documenting and engaging with communities that she lives with who I think point us in the direction of where New Zealand is heading as a society."

She says she first started following Edith's work via Instagram rather than through orthodox arts media.

Coming to prominence in the early 2000's, Edith Amitauna'i offers an insight into the custom and nuance of migrant life.

She says it was at this time her practice moved from photographer to artist.

"2003 or 2004 is when I had my first institutional show and it's interesting when something strikes a chord outside of yourself. Yeah, so I was surprised to see that institutions were interested in what I was doing."

She was the inaugural Marti Friedlander Photography Award winner in 2007.

While her work is of a very personal nature, a mix of Cambodian, Eritrean, Samoa and Togolese children playing in her back yard for example, she keeps other viewers in mind.

"You think about yourself and you think about an audience. There are artists who make the work for themselves and it's a very personal thing but I was always aware that I wanted to make it for an audience because I felt like there wasn't enough of what I thought was really interesting around, so I thought, oh yep, I'm going to put it out there for people to see."

And put it out there she does. Her followers engage with and share her work via social media.

"We don't want to just put another press release out'. Why don't you Edith, we have a different approach, why don't you create the promotional video as you've done for little samplers in the past which was a really different approach. We shared that and it's boosted Adam Art Gallery's social media presence."

She says Edith's work was a subject of her study at art school.

"She was the only photographer of Samoan descent and the only one that was present in the important books of photography, so Contemporary Photography by Lara Strongman which is one of the bibles. It was revelation and a real insight because it was someone who was telling those narratives that were familiar to me."

When approached by Adam Art Gallery director Tina Barton to curate the show, Ane Tonga says she already had a strong idea of the themes it should follow.

Tina Barton says the survey of work is both positive and important in how it informs the viewer, and special in the way Edith engages with her subject.

"Not as the classic documentary photographer who comes in with their objective eye as an outsider but as someone who's an insider who is showing her community, her family, her people in ways that I suppose upend certain assumptions and expectations."

Edith Amituana'i's show Double Take is on show at the Adam Art Gallery at Victoria University until mid July.

A major publication of the artist's work is being launched to coincide with the exhibition.