Fiji gets UN leader's praise for 'standing up for the planet'

The United Nations Secretary General Antonio Guterres has praised Fiji for, as he described it, "standing up for the planet".

Mr Guterres is in Fiji as part of a Pacific tour aimed at mobilising international support ahead of UN climate action summit in New York in September.

Our reporter Sally Round's been following the visit. 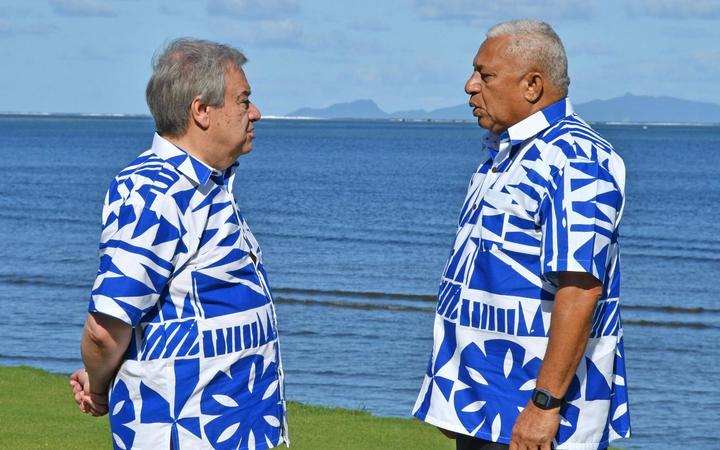 Mr Guterres met with the Fijian prime minister on Thursday a formal meeting and afterwards in a  statement to the media he praised Fiji for its contribution to peacekeeping ... for being a strong committed partner in hotspots round the world.

He then turned to climate change praising Fiji's people and its leaders for taking a leading role in the battle . Here's what he told reporters

"The prime minister was telling me in the meeting we just had that climate change corresponds to the battle of our lives from the point of view of Fiji and the Pacific. As secretary general of the United Nations , I have many battles but I have  no doubt to say that as a grandfather this is also the battle of my life."

Mr Guterres says it needs to be recognised the battle is not being won for commitments made in Paris on climate action and there needs to be much stronger political will to rescue the planet.

He says there's nowhere better than the Pacific to feel the moral duty to rally the international community.

And Mr Guterres has also addressed the Fijian parliament?

Yes he gave a speech again praising Fiji for its work on climate change and thanked its leaders, government and people for as he put it standing up for the planet.

Mr Guterres also touched on the need to scale up the fight against intolerance and hate speech.

He praised the Fiji parliament for being the first in the world to undertake a self assessment of the sustainable development goals.

He spent most of the address talking about the need to fight the battle against climate change saying other countries in the region can learn from its example.

Yes the Pacific Island leaders asked the UN Secretary General to tell the world their region is running out of time.

They held a High Level Political Dialogue with Mr Guterres who said what he'd learnt would have a huge impact in preparing for the New York action summit in September. on for instance the need for more money and better mechanisms for countries like those in the Pacific to cope.

And there's been some attention on the treatment of a leading Fiji human rights activist over the visit?

Yes Shamima Ali of the Fiji Women's Crisis Centre - a prominent human rights defender in the Pacific - has spoken out saying she was questioned by police numerous times in the lead up to Mr Guterres visit.

She told the Fiji Times that someone identifying himself as a member of the force called her about five times over two weeks demanding to know what she planned to discuss with Mr Guterres and she said that went against freedom of speech and privacy.

When questioned by a reporter about whether human rights issues were discussed  at the meeting with the Fijian prime minister Mr Guterres sidestepped.