High court to rule on validity of PM Sogavare's nomination

The High Court in Solomon Islands is due to rule tomorrow on the validity of prime minister Manasseh Sogavare's initial nomination to contest the top job.

Yesterday Mr Sogavare successfully contested the prime ministerial election and he has since been sworn in as the new leader of Solomon Islands.

But his victory was steeped in controversy and major unrest broke out in the capital Honiara shortly after his acceptance speech on the steps of parliament.

Koroi Hawkins has been following developments on the ground and filed this report. 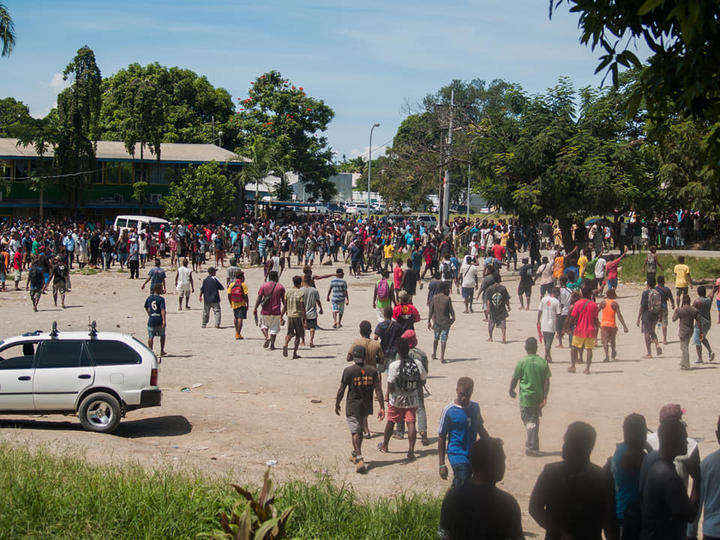 Crowds rioting in Honiara after Manasseh Sogavare was voted in as PM Photo: Gino Oti

This was the mood in the capital Honiara on Wednesday shortly after Manasseh Sogavare was announced as the next prime minister of Solomon Islands.

Unrest continued into the early hours of Thursday morning with police battling rioters, looters and opportunists who stormed the streets, yelling, throwing rocks, and causing significant damage to shops and businesses in the capital.

It is Manasseh Sogavare's fourth prime ministership making him one of the most capped MPs for the top job in the country's history.

But his victory has been marred by controversy.

The rival prime ministerial candidate Matthew Wale has filed a legal challenge against the validity of Mr Sogavare's nomination for prime minister based on the late registration of his political party.

But constitutional lawyer Charles Ashley believes Mr Wale might have left it too late to make the challenge.

The conflict or confusion is centred around a piece of legislation called the Political Parties Integrity Act. Designed to try and strengthen Solomon Islands political party systems and reduce instability.

It was passed by parliament despite the absence of crucial constitutional amendments to render it fully effective.

Further complicating Mr Sogavare's election as prime minister was a court order obtained by Matthew Wale and delivered to the governor general Sir Frank Kabui just before Wednesday's election calling for the postponement of the process pending the High Court ruling tomorrow.

Sir Frank chose to ignore the court order and proceeded with the election prompting Mr Wale and his counterparts to stage a walkout claiming the governor general's action was illegal.

But Mr Ashley believes Sir Frank was acting within the law as the Solomon Islands constitution provides special protections for the governor general and his running of the election of the prime minister.

Mr Ashley believes even if the High Court were to rule Mr Sogavare's nomination for prime minister invalid based on the Political Parties Integrity Act it would be rendered ineffective by the constitution which says any MP can be nominated for the prime minister's post.

Meanwhile, an uneasy calm has settled over the capital Honiara after Wednesday night’s unrest.

Police say they have arrested 30 people so far in relation to the rioting.

And dozens of people have been lining up at the National Referral Hospital with cuts and bruises one doctor posted on social media condemning the violence saying a young boy has needlessly lost an eye as a result of lawlessness.