The Cook Islands parliament sat for the first time yesterday since the nation's general election in June 2018.

This came amidst several controversies including an outstanding warrant for the arrest of a new MP, a sudden resignation last week and the absence of a speaker. 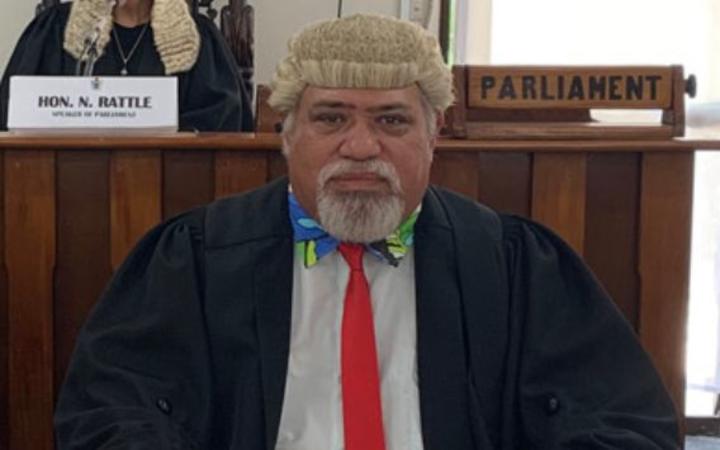 DW: Albert Nicholas was among the three MPs being sworn in, but he is being sought by a court in New Zealand. What do they want him for?

JM: The former minister was due at the Manukau District Court on 26 March to face a charge of unlawfully taking a motor vehicle.The Avatiu-Ruatonga-Palmerston MP and former Internal Affairs Minister had pleaded not guilty in January.

DW: And you spoke to the Clerk of Parliament on this matter. What did he have to say?

JM: Tangata Vainerere says Albert Nicholas is free to carry on as an MP as he has not been convicted of any crime. He confirmed the newly sworn in MP is facing an arrest warrant from New Zealand Police and is in what he called 'a little bit of a legal situation right now'. However, he says Cook Islands regulations do not bar any member from parliament even up to the stage of being arrested. Here's what he told me.

"Our laws clearly say that when a Member is convicted of any crime under the Crimes Act, then that Member will be dealt with accordingly by the Privileges Committee of Parliament and they will be declared no longer Members of Parliament. So that's why yesterday he had to go through his swearing in on the presumption that everyone is innocent until proven guilty."

Mr Vainerere says Mr Nicholas is free to come into parliament and participate in sittings and is also free to continue his work as an MP in the community. He says he has not received any communication about the matter from the Cook Islands Police or the Crown Law Office.

DW: What does Mr Nicholas say?

JM: I haven't been able to get comment from Mr Nicholas yet but the Cook Islands News spoke to Mr Nicholas yesterday at his swearing in celebrations and said he is determined to clear his name and deliver in the job he has been elected to do. He says he was contemplating moving on as he was struggling to find inspiration but supporters from his community and rugby league club motivated him to return to Parliament and try to make some positive changes. He says he's in a good space at the moment and feels things will improve.

DW: Any word from Mr Nicholas' party on the matter?

JM: A spokesman for the Prime Minister Henry Puna's office says to his knowledge the PM and leader of the Cook Island Party of which Mr Nicholas is a member, had no intention of releasing any statement on the matter.

DW: And parliament was live-streamed for the first time yesterday?

JM: Yes, live streamed on Facebook for the first time ever ... something other parliaments are doing around the region...including Fiji. We watched the three MPs being sworn in and while the proceedings were in Cook islands Maori, a translator was also on hand to translate.

DW: What's the situation with Tehani Brown, the MP who resigned last week in the middle of a petition process questioning aspects of her by-election campaign?

JM: The Clerk of parliament confirmed the petition hearing put forward by the losing opposition candidate from that by-election Nandi Glassie will proceed. He said the Tehani Brown has resigned her seat but officially the seat is not 'vacant' but is being called 'empty'. He says the next hearing of the petition is on the 28th of May in court. Here's Mr Vainerere again.

"The members of the Opposition who are claiming under the Section 88 of our Electoral Act, of bribery. And then the government or the member that resigned will have to defend according to that. So depending on how the court sees it, we will then have a number of scenarios; one is similar to the Rakahanga case or the other may be, can be a by-election, that depends on the court."

So the Rakahanga case was an example of a court petition over turning an election day result after evidence of 'treating' some voters to food and drink and those votes being struck off the final tally.

DW: And the MP for Rakahanga  was among those worn in yesterday?

JM: Yes, two other members sworn into parliament yesterday - Rakahanga MP Tina Browne, who's also the leader of the Democratic Party, and Ivirua MP Agnes Armstrong, who replaced her husband in the Mangaia seat after his recent death. A new deputy speaker was also elected by parliament yesterday with the role going to Mr Tai Tura from Mauke who is a member of the Cook Islands Party. The speaker Niki Rattle has been granted extended leave while a family member attends to a health issue in New Zealand.