Rights groups are concerned for the welfare of dozens of Bangladeshis who say they were trafficked to Vanuatu and are now in limbo there.

The 101 men stuck in the capital Port Vila have described torture and abuse, in what could be the biggest human trafficking case in the Pacific. 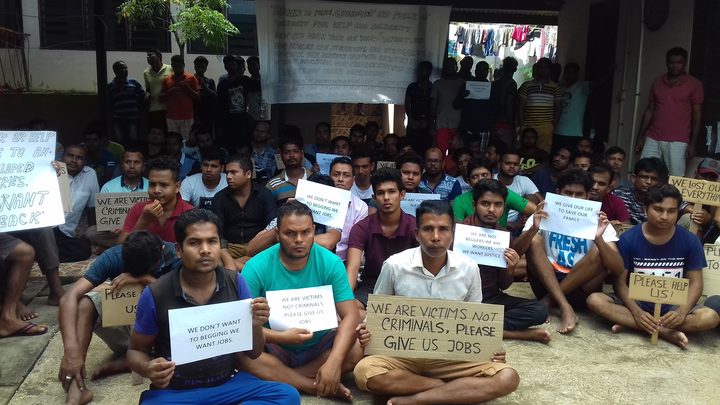 A group of Bangladeshi men stuck in limbo in Port Vila. Photo: Supplied

Shahin Khan came to Vanuatu chasing his hopes and dreams, and a means to provide for his family in Bangladesh.

Instead, he says he was duped by human traffickers, who enslaved and tortured him and dozens of others.

Although free from his former captors now, Mr Khan is heavily indebted and unable to work legally in Vanuatu.

"I was tortured, I was starving, it's a very horrible situation actually, our heart is burning, you know, it can't stop."

Mr Khan's testimony is one of 101 Bangladesh men, who paint a grim picture of migrants lured by a businessman who promised the world, only to snatch it away.

Vanuatu's Public Prosecutor, Josaia Naigulevu, has told local newspaper the Daily Post that it might be the biggest case of human trafficking in the Pacific.

For months, the group was forced to work long hours for no pay, kept in squalid conditions and given little food -- often only rice and boiled cabbage.

Anne Pakoa, head of the Vanuatu Human Rights Coalition, says if they spoke out, the punishments were brutal.

"No one was allowed to say something bad and if someone said something bad either about food or the conditions, that's what would happen, they would take them outside of town and bash them up, like really, really bad."

Victims say they were promised construction work in Vanuatu paying up to $US5000 per month -- nearly 50 times the national average in Bangladesh.

Many paid as much as $US25,000 to get there, scrounging and mortgaging their homes in the process.

Anne Pakoa says four people have been charged in connection with human trafficking and are now before the courts.

Their arrests followed a November police raid, which freed more than 100 men, according to Shaheen Khan, who was able to escape and alert authorities.

Ms Pakoa says the case has been adjourned until April because the defendants said they needed a translator.

Meanwhile, the migrants, under government care, aren't able to work in Vanuatu and face crippling debts.

Shaheen Khan says he, like many others, fears he will be killed by loans sharks if he returns to Bangladesh.

"If we go back now, what will we do? We have nothing to do except commit suicide, kill ourselves because people will kill us because we have to pay the money."

Advocates and victims say the government, which couldn't be reached for comment, won't let them leave Vanuatu until the case is resolved in court.