Thousands of mourners from all walks of life attended the funeral of Fiji Imam Haji Musa Patel at the Manukau Memorial Gardens in Auckland on Thursday afternoon.

Mr Patel was among 50 people killed in separate mosque attacks in Christchurch last week which also left about 50 others injured. 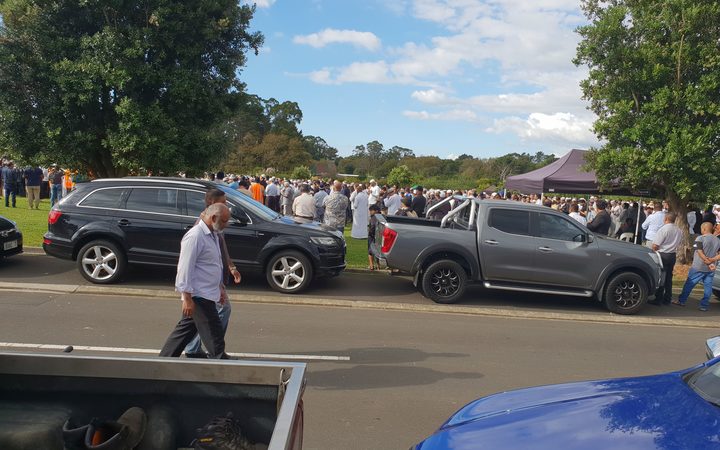 Family and friends of the late Imam Musa Patel pray behind his body during his funeral at Manukau. Photo: RNZ Pacific/Christine Rovoi

When I met 23-year-old Hamilton lawyer Sana Mohammed, at the Jamia Masjid Al Mustafa Mosque in Otahuhu yesterday, she was helping the elderly women into the women's section of the mosque.

Muslim women are forbidden from joining the men in the main prayer hall of the mosque.

Ms Mohammed, who's from Rakiraki, on north Viti Levu in Fiji, was among family and friends who came to pay their respects to a respected loved member of her family.

She says the events of Friday March 15 have forever changed her family.

Ms Mohammed could not accompany her male relatives and friends to the cemetery at Manukau because it is also forbidden for Muslim women to be present.

For Safia Sabbir, taking time off work this week to pay her respects to Haji Imam Musa Patel, was the least she could do.

The 43-year-old Auckland nurse was among family and friends who farewelled Mr Patel.

She says the imam had officiated at her wedding in Fiji and she would never forget his kindness and the advice he gave them.

"I've known him since I was a child in Fiji. He was the scholar who got us married in 1995. Very close to our hearts. We are here to pay respects to the family and to him."

Safia Sabbir says the family will continue to pray for the rest of the victims and their families and for New Zealand.

The president of the South Auckland Muslim Association, Abdul Shakeel, says it's been a tough week for the families, the communities and NZ as a whole.

Mr Shakeel says he understands the frustrations of the families but he adds the authorities are working hard to ensure they're receiving the support they need.

"Thank them for the way they have catered these things. I know the frustrations are with the families. The time it has taken for the process as the government has to make sure because it's a criminal case."

Abdul Shakeel, who has known the imam for most of his life, paid tribute to Mr Patel saying he was a much-loved man who dedicated his life to the communities.

He says Muslims across NZ's North Island and from abroad were honoured to have had the opportunity to farewell the imam.

"His followers are a lot. You'll see so many things in here as well, in the cemetery as well. Why so many people are here for one person because he has done so much things for the whole Muslim community - entire."