Crocodile attacks on the rise in Solomon Islands

A new report has found that crocodile attacks on people in Solomon Islands have increased significantly over the past decade and will continue to rise if nothing is done to prevent them.

Released last month "Human-crocodile conflict in Solomon Islands" is a report on a nation wide survey conducted by the WorldFish Program in 234 villages across Solomon Islands between April and August last year. 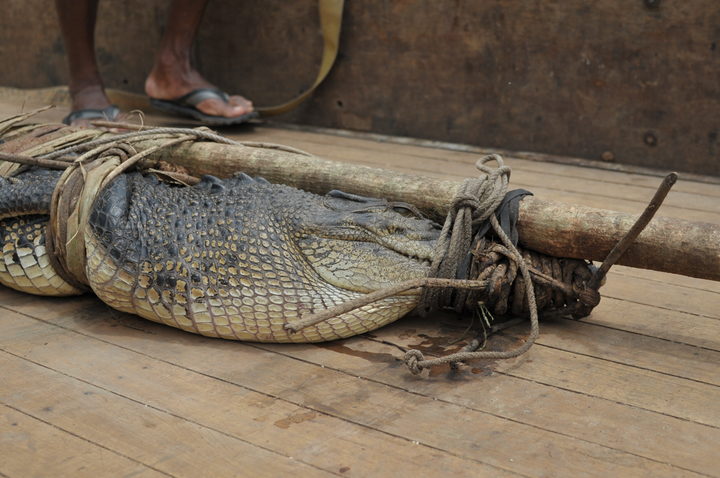 One third of those attacks resulted in a person's death.

Some of the accounts captured in the report are chilling.

"In 2008, Don Ricky was playing in the sea with some kids from his village, New Land in Marovo Lagoon, Western Province. At dusk the other kids headed home, but the six-year-old boy went back into the sea to fetch his ball. A crocodile suddenly pulled him under. The villagers never found his body."

One of the report's authors, Dutch scientist Jan van der Ploeg, links the increase in attacks to a burgeoning crocodile population since the government banned the export of crocodile skins in 1993 as part of a global push to prevent the reptiles from becoming extinct.

"And when they stopped hunting the population was very small but it responded and it recovered very rapidly. So there are more and more crocodiles and larger crocodiles than twenty, twenty five years ago and that is leading to many more attacks. And that is one of the main findings of our report the number of attacks is also increasing and that is really a worry."

But it's a complicated problem to address in the Solomon Islands.

Killing crocodiles is forbidden in many of its cultures with kastom stories or folklore depicting them as sacred animals or ancestral spirits like in this one abbreviated from the report.

"A long time ago one of our ancestors had a son. He and his wife loved their son very much. But one day they noticed their son had a tail...One day a close relative from another village paid them a visit. He shouted at the boy and chased him out, so the boy went to Wairaha River and it became his home ever since. This was the beginning of our tribe."

The report found that on average at least 5 people a year were attacked by crocodiles in Solomon Islands between 1998 and 2017 but in the first few months of 2018 alone there were 13 attacks, three of them fatal.

Jan van der Ploeg says the report recommends including more safety awareness for communities living near known crocodile habitats, more training and help for police to hunt down killer crocs and legalising the sale of crocodile products in Solomon Islands.

"One of the key issues that we are thinking of is to set up an awareness program. So making sure that the people in the villages receive more information on how to deal with the crocodile problem. And if people have a serious problem with crocodiles and they cannot solve it then the Royal Solomon Islands Police Force can come in to assist."

Staff from the Solomons' ministry of fisheries and ministry of environment are now drafting a new crocodile management strategy which they plan to submit to the new government for approval, after the elections next month.