The changing role in the Pacific relating to transnational crimes has been highlighted at a recent workshop in Samoa run by the Pacific Immigration Development Community.

The agency's head, Ioane Alama, spoke to Jenny Meyer about how some Pacific nations are becoming "source and destination" countries rather than "transit" countries for both human trafficking and people smuggling. 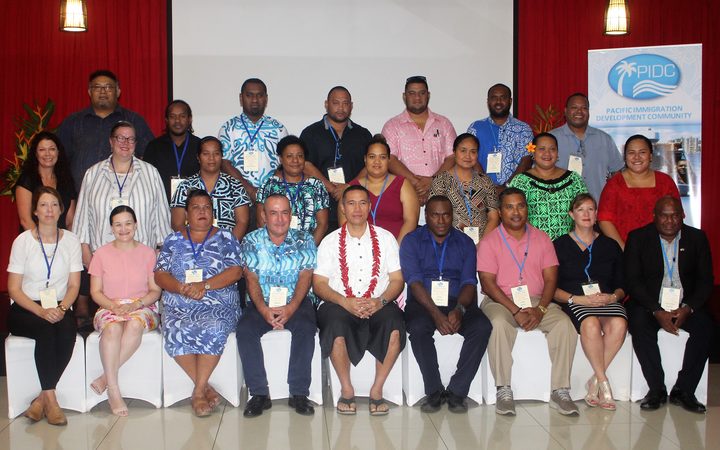 The delegates that were in Apia for a people smuggling/human trafficking transnational crime workshop. Photo: Supplied

IOANE ALAMA: For the most part we've mainly witnessed Pacific Island countries being used as a transit country. With persons being trafficked and smuggled mainly for destination countries for example Australia, New Zealand and the United States of America. In some instances the Pacific Island countries are the destination country, especially when we're talking about persons being trafficked for labour purposes. So for example we have reports of cases where logging companies and mining companies and also more recently increasing reports regarding fishing companies exploiting labour. In that sense we have witnessed more and more countries becoming destination countries. But again, each country has its own individual problems and issues and they have to try and develop national activities and processes to find a way to combat both human trafficking and people smuggling.

JENNY MEYER: For people who are not kind of in this world all the time, what's the difference between what you're calling human trafficking and people smuggling?

IA: The main difference is exploitation. When we're talking about trafficking there is always an essence of exploitation. The person being trafficked, there's a form of exploitation, whether its labour, forced labour, in some cases there's servitude, we've heard of sexual exploitation in terms of prostitution. And also more recently we're hearing references to slavery, or practices similar to slavery. For the smuggling of migrants this isn't the case. This is just instances where for financial and material gain one person procures the illegal entry or illegal residence of another person into another country, which means crossing of borders.

JM: What are you hoping will come out of the workshop that you've just had?

JM: What about for the public? What should people do if they're really worried about maybe something they see going on in their own community that they're worried about what's happening to the people involved, what should they do?

IA: I guess it goes back to the old saying of 'see something, say something'. And in our discussions last week there were reports of remote communities in some countries being targetted. These were unconfirmed reports. So from our perspective, one of the key areas of our framework is actually raising awareness in local communities about the dangers, potential dangers of human trafficking and people smuggling and how that might affect them locally. So we foresee that one of the key components of the framework will be trying to make sure that members of the more remote communities of the Pacific Island countries are aware of the possible dangers and are on the look out and again have quick access to government support in terms of responding to potential threats.