Anti-violence campaigners in Tonga say a recent fact-finding mission to Fiji has helped them become better soldiers in their fight against violence.

As Christine Rovoi reports, it has given the Tongans - involved in responding to violence - a range of service delivery models for family and domestic cases. 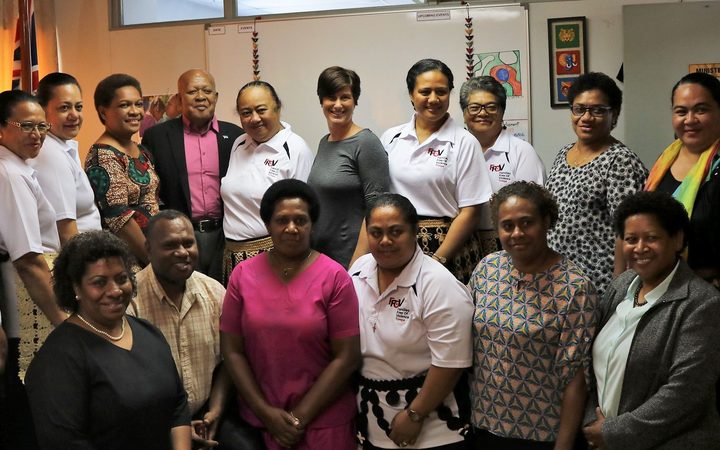 Anti-violence campaigners from Fiji and Tonga in Suva Photo: Supplied

The Pacific has some of the world's highest rates of domestic violence.

According to the UN, it's more than twice the global average - two out of three Pacific island women will experience domestic violence.

The manager of Tonga's Families Free of Violence organisation, Eleni Mone, says the tour to Fiji helped the Tongans gather and exchange ideas with their Fijian counterparts on how to respond to violence.

"To let the group engage and find out what's happening so that when the group goes back to Tonga, they'll have identified okay that would work for Tonga or that won't work for Tonga. So that the Tongans themselves build up their own as to context - availability of resources and also the way we Tongans think. Sometimes it's a little bit different."

Eleni Mone says violence is a significant problem and one that governments are not taking lightly.

The agency UN Women is also helping to facilitate the fact-finding missions.

Its Pacific representative, Abigail Erikson, says governments working against violence in the Pacific need to synergise their programmes across urban and rural areas.

"Government taking a leadership role in bringing together the different sectors, whether it's police, education and other sectors. But it's very important that everybody is on the same page. Everybody is kind of singing from the same song book - when it comes to how women and children should be treated in the aftermath of violence."

Ms Erikson says it's important that government agencies work together to ensure that they are using the same principles and standards.

She says women and children in remote areas need the same programmes available to victims of violence in urban centres.

"And to make sure that the police, health, social services, crisis centres are working really well together so that we can make sure that women and girls don't get dropped along the services that they need, and that there's a nice continuum of care and everyone is working together."

Tongan official Polotu Paunga agrees governments play a crucial role in the fight against violence in their countries.

Ms Paunga says their goal is to help agencies in Tonga strengthen what is already in place and to provide safety.

"For the challenges that we're facing is with regards to making it official. That the referral pathways and our approaches to maximise outreach for survivors of domestic violence."

Abigail Erikson says the UN agency's role is to support Pacific countries in their efforts .

"Across the Pacific, countries are in different places in terms of the tools, the protocols, the systems that they have developed to help women and girls who have experienced violence to get the help that they need."

The Tongans will now go to Canberra to study Australian systems that respond to violence.