Samoa's government is being accused of stifling dissenting views after a village mayor was sacked for openly criticising land laws.

Otemai Liu Ausage of Nofoali'i village was fired on Thursday after he reportedly claimed his village's land had been leased without consent. 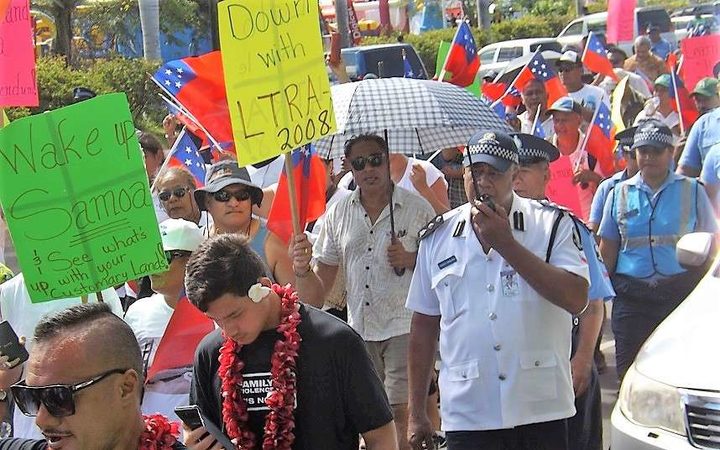 There was a heavy police presence in Apia as about 200 people turned out to protest against land laws. Photo: RNZI / Autagavaia Tipi Autagavaia

When the government fired Otemai Liu Ausage for his comments in local media, he hadn't even seen the report.

Otemai, who had been mayor of Nofoali'i for just a year, says the move is unfair.

"The village appoints the mayor and now I found out they are not happy with me because of my acting against the government, so now they said, well you are off."

Last week, he told a newspaper his village had lost 180 acres of land to government repossession.

Three days later, he was fired.

A letter from the Ministry of Women, Community and Social Development told Otemai his claims of land repossession were unfounded.

The letter said it was no longer appropriate for him to represent and be paid for by the government.

"The government's attitude is one of overbearing, dancing to the music of the Chinese and foreign investors, caring less about our people whose lands are being affected. They have never given informed consent."

The mayor's firing comes amid protests and a public outcry over the alienation of customary land.

In January, Tuilaepa dismissed claims the act was being misused to seize land as "fake news".

Fesola'i Aleni Sofara, a law lecturer at the National University of Samoa, says everyone in Samoa has the freedom to speak their mind.

But he says village mayors are expected to be loyal to the government.

The former mayor, Otemai, says he's been a government employee for 20 years but will retire after his dismissal.

"I'm old now so I better stay with my grandchildren and serve my village, the village council."

The Nofoali'i village council is yet to appoint a new mayor but will meet this week.