A war of words has emerged between a Samoan MP and China's ambassador to Samoa over the flying of Chinese flags in the country.

After calls for the government to take down the flags, the two men have taken to a local newspaper to call each other names. 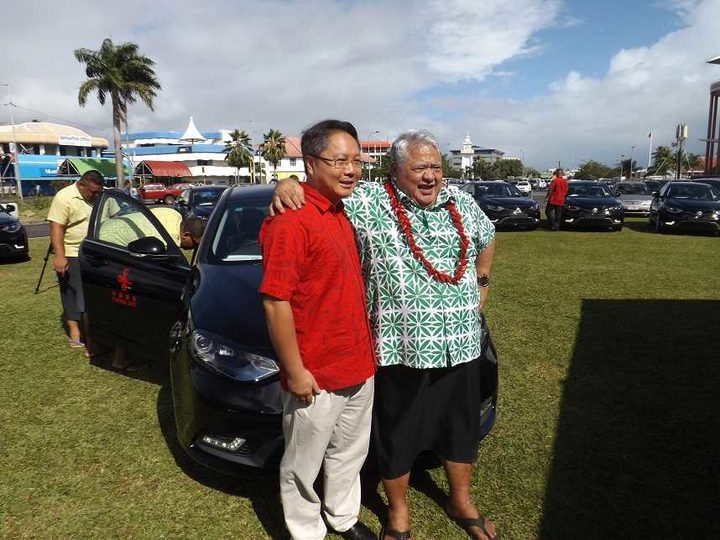 The spat started last week, when opposition MP Olo Fonoti Vaai called on the government to remove Chinese flags from aid projects in the country.

Olo was concerned about Samoa's spiralling debts to China, which sat at $US420 million at the end of last year.

Wang Xuefeng, China's ambassador to Samoa, penned a column in the Samoa Observer calling the remarks "ignorant and ridiculous".

He says some people in Samoa are growing more concerned with China's obvious presence there, as the country's biggest donor last year.

"There are people raising concerns over a number of Chinese businesses in the company, especially shops, and plus Chinese aid to Samoa and a number of contractors from China who have been awarded to build these buildings here."

Olo's response to Wang on Monday was even more cutting, calling him a "cheeky boy" who should be deported.

The Samoa Observer reported the MP saying that the newspaper column was disgraceful, impolite and out of line.

"If I were the Prime Minister of this country, I would put Mr. Xuefeng on the first flight back to China for being disrespectful.

The quarrel comes amid widespread debate on the merits of Chinese investment in Samoa, where the government has embraced Beijing's Belt and Road project.

Like others, Olo appeared to take issue with China's visibility even as other flags fly in the country.

"There were also other flags, like the Samoa flag, also flying at the place where the multipurpose hall is build by the contractor. And also the Japanese government is also funding one of the main bridges in town - their flag is also flown there."

Autagavaia says the reality is that locals in Samoa value and utilise Chinese investment and local businesses.