The Marshall Islands President, Hilda Heine, says an impending vote of no confidence against her is part of a Chinese-backed effort to take over one of the country's atolls.

On Monday, the Nitijela, or parliament, will vote on whether to unseat Dr Heine, the first and only female head of state in the Pacific. 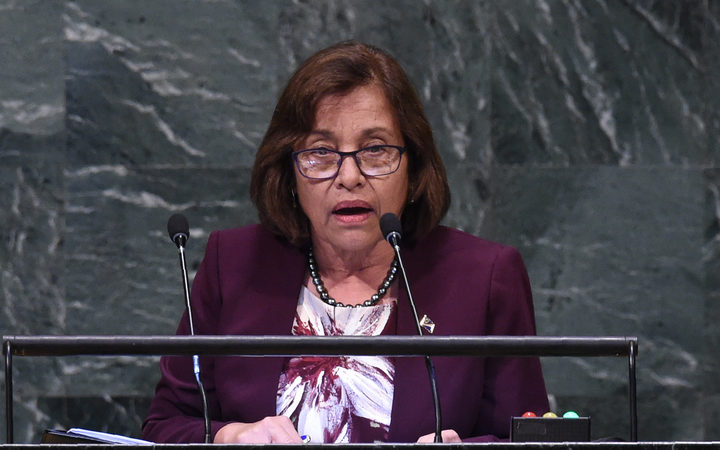 This week eight senators introduced a motion of no confidence against the President, saying a plan to introduce a cryptocurrency as legal tender had tainted the Marshall Islands' reputation.

They also criticised Hilda Heine's administration for what they said was its unequal treatment of outer islanders.

Dr Heine says all of this is a smokescreen, attempting to disguise the real issue at hand.

"Really the vote of no confidence is about the so-called Rongelap Atoll Special Administrative Region, or RASA scheme, which is an effort by certain foreign interests to take control of one of our atolls and turn it into a country within our own country."

Those foreign interests, she says, are Chinese interests.

The RASA scheme is a joint-effort between Chinese businessman and Marshallese citizen Cary Yan, Kenneth Kedi, the parliamentary speaker, and Kessai Note, a senator and former president of the Marshall Islands.

The project is understood to have further backing from other senators in the Nitijela, including those who signed the motion.

Draft legislation for the special region, which would have relaxed tax and visa requirements for foreign investors, was recently rejected by the Government.

Dr Heine says she has no evidence that Chinese state interests are involved.

But she says if the project goes ahead there's no way of ensuring China wouldn't make a grab for Rongelap and claim it as its own.

"We have to be cautious knowing what the geopolitical situation is in the Pacific region and I think it's important for the Government to do its own due diligence and make sure that the sovereignty of the Pacific is secure."

She says backers of the project, including from Rongelap's local government, are behind the no confidence motion.

"We are a small country and it is easy for foreign elements to influence individual people and so I think that the more education and information that we share with the public the better so we can see initiatives for what they are."

Kenneth Kedi denies the connection between Rongelap and the motion.

Senator Casten Nemra, who introduced the motion, says as well as the publicly disclosed concerns, he wants an investigation into funds which went missing from the Marshall Islands Trust Fund last year.

But observers say Dr Heine's opponents have focused on their efforts on issues more likely to succeed in unseating the President.

Giff Johnson, the editor of the Marshall Islands Journal, says a no confidence vote based solely on an investor proposal would be unprecedented and was better left unsaid.

"This is a flashpoint in the whole development of the motion of no confidence even though it is not one of the five points that senator Nemra outlined in his speech."

Dr Heine says she has every confidence her coalition will survive the vote on Monday.