Climate finance not reaching those most in need says Caritas

A development agency says money aimed at battling climate change is not reaching the Pacific's poorest and most vulnerable.

A report by the Intergovernmental Panel on Climate Change is today expected to confirm how far behind the 1.5 degree emissions reduction goal the world is and some drastic options to correct the course. 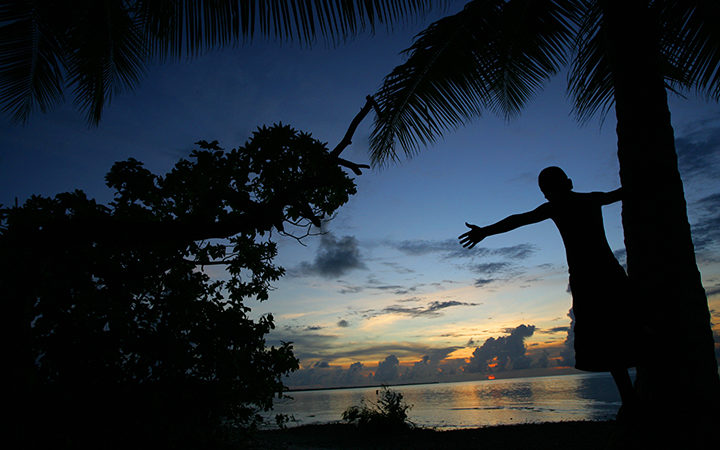 Representatives from the Catholic aid agency Caritas gathered in Wellington to share their stories of how climate change is affecting their countries -- they're the canaries in the coal mine, they say.

Such as Francis Waleliofala, who lives on the ocean's edge in Malaita, Solomon Islands.

He says when the king tides come, the villages of Lilisiana and Siwai become rivers and the sea is eating into a local cemetery.

Father Martin Everi is from a country whose future existence is now being called into question by scientists.

Kiribati is one of the global poster-children for the effects of rising seas on low-lying atoll nations.

Father Martin says his people are the victims of a problem others have caused. But they're not giving up, he says.

"We are building higher sea walls and also planting mangroves to protect the coastal erosions. Despite all that we do hope that the wealthy countries will also do their part in helping to reduce impact of climate change."

If they do have to leave, one of their likely refuges will be Fiji.

"Already the Kiribati people have bought a big piece of land in the north island of Fiji so migration is definitely a reality, climate migration."

Fiji, in particular its prime minister Frank Bainimarama, has been jetting around the world championing the cause of climate change, including its recent stint as president of global climate talks in Germany.

Mr Chong says the government could be doing better at home.

"In making sure that there are policies especially in terms of environmental exploitation like mining, stone extraction, black sand mining and also make sure that our policies reflect COP23 and the proposition of COP23."

Around the world money is being poured into helping countries - especially poor and vulnerable ones - to fight climate change.

But Caritas's New Zealand director, Julianne Hickey, says that finance is not getting beyond large institutions and government structures.

"We've heard time and time again from the Solomon Islands through to Tonga, to Papua New Guinea that it is not reaching those who need it most and those who've done the least to cause the issues of climate change."

She was in Vanuatu for the recovery from Cyclone Pam and in Fiji following Winston.

"We know for every one dollar invested in mitigation, preparation activities at community level, we save ten dollars in the cost of actually then responding to the impact of a disaster."

The agency says the region is threatened by the inadequate financing, and it plans to take this to the next round of global climate talks in Poland in December.