Indonesia hits out at Vanuatu at the UN over West Papua

Indonesia has lashed out at Vanuatu over its representations about West Papua at the United Nations General Assembly in New York. In what has become an annual fixture, Pacific leaders have voiced concern about human rights in Indonesia's Papua region, known widely as West Papua. But, as Johnny Blades reports, Vanuatu's persistent criticism of Indonesia over its Papuan provinces has touched a nerve with Jakarta. 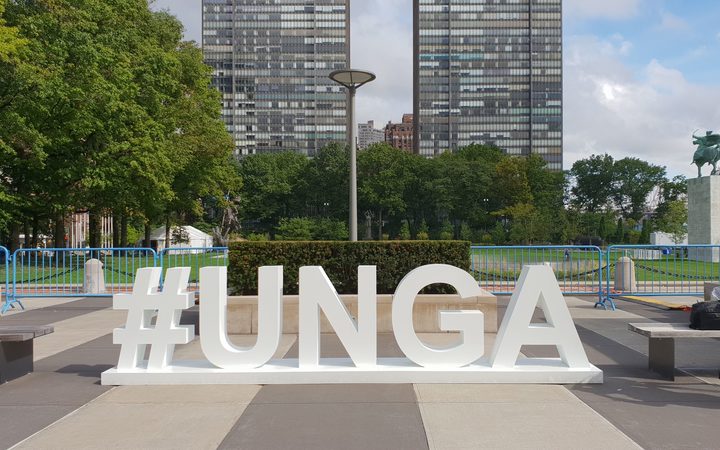 Vanuatu's prime minister Charlot Salwai, a long time supporter of West Papuan self-determination, told the General Assembly in New York that decolonisation must remain on the UN agenda. He said the international community had witnessed violence and violations of human rights suffered by West Papuans, and called on the Human Rights Council to investigate.His words are translated:

"We also call on our fellow leaders of the world to pay greater attention to these inhuman acts, and together with Indonesia to put an end to all forms of violence and find common ground with the populations to establish a process that will allow them to freely express their choice."

Indonesia denies the claims of flagrant abuses against Papuans by the country's military forces. In its right of reply, Indonesia's Permanent Representative to the United Nations Dian Triansyah Djani targeted Vanuatu's links with the West Papuan independence movement.

"This country argues that based on these factors injected into their minds by criminal individuals that the two provinces (Papua and West Papua) have to be debated at the United Nations. We fail to understand the motive behind Vanuatu's intention in supporting a group of people who have striked terror and mayhem in so many occasions, creating fatalities and sadness to innocent families of their own communities."

He said Vanuatu's accusation of abuses in Papua was unacceptable.

"No country in this world is free from human rights or development challenges. But accusing others of human rights violations when one has so many problems of its own is like the pot calling the kettle black."

Earlier, in reference to Vanuatu's statements, Indonesia's vice president Muhammad Jusuf Kalla condemned what he described as an act of hostility against its territorial integrity.

In rejecting Vanuatu's push for West Papuan self-determination, Indonesia has referred to a United Nations resolution from 1969. Resolution 2504 took note of the so-called Act of Free Choice, a controversial referendum which was the culmination of the former Dutch New Guinea's incorporation into Indonesia. The West Papuan independence movement says that because the plebiscite was not formally approved by the UN, and was not based on universal adult suffrage, Papuans should be granted a legitimate self-determination process. Vanuatu was not alone in urging the UN to address Papuans' historic grievances, with Tuvalu's prime minister Enele Sopoaga among those calling for recognition of the indigenous people.

"The United Nations must also engage with the people of West Papua to find lasting solutions to their struggles."