Papuan governor seeks to open up relationship with PNG

The Governor of Indonesia's Papua province says West Papuans should be able to connect more with people in neighbouring Papua New Guinea.

The call from Lukas Enembe comes as he is visiting PNG's capital Port Moresby.

He  travelled there  to attend celebrations to mark PNG's 43rd anniversary of independence at the invitation of the governor of PNG's National Capital District, Powes Parkop

Mr Enembe, who was recently re-elected as governor, told Johnny Blades that it shouldn;t have taken 43 years for PNG and Papua to have formal contact. 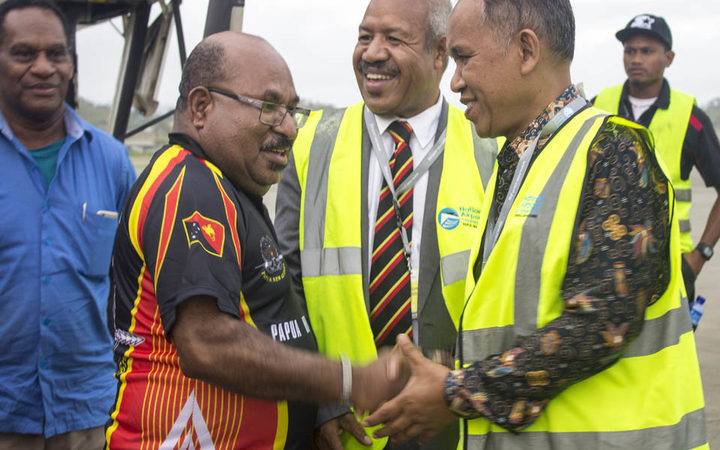 "Why we didn't come to PNG and connect with them before, for all these years, it's no good. That's why I'm thinking we must open the relationsihp with PNG, we must join together economically, politically, culturally.

"It's good for our people, good for our government. We need to be closer with PNG. They're very important in the Pacific Islands. That's why we must join together with them."

"My government said "you go, this is very important" because it's good to build the relationship with PNG. Theyre not afraid of that."

Governor Enembe is not outwardly pro-independence. But he says while Papua region has been given special autonomy by Indonesia, the arrangement hasn't worked, because Jakarta still controls affairs in the Papuan provinces.

He is candid about the impact of Indonesian security forces in Papua.

"Every day my people are being killed. That's why I think.. the military of indonesia, the police of Indonesia, they've stopped thinking about the humanity in Papua.

"Some people in the Highlands, and the coast, they come to me, they're crying, crying about what's happening in Papua. Humanity is very important."

The Governor says West Papuans are dying at a disturbing rate through three main causes: because of neglected health services, because of the spread of HIV AIDS, and because of alleged killings by the security forces.

"We are becoming a minority in Indonesia. A lot of people they die. I don't know... is this by a system...I don't know."

He says Indonesia has taken Papua's land, minerals and forest resources. That's part of the reason why Papuans want to reconnect with PNG people, their Melanesian kin.

"We can open the links to PNG, because Papua and PNG .. this is our land, from Sorong to Samarai one land. One land. And Papua new Guinea and Papua the people, we have one land,  one culture, this island."

After Moresby, the Governor is heading to PNG's second city of Lae, where he hopes to sign an economic collaboration agreement with the Morobve provincial government.

Then before heading back across the border, Mr Enembe will visit the northern towns of Madang and Wewak, further building links between his povince and PNG.