Think tank says illegal logging in PNG worse than ever

The American based think tank, the Oakland Institute, says foreign loggers in Papua New Guinea are taking much timber and evading the tax due on it.

It's a followup to a report from two years ago which condemned the rampant illegal logging happening in PNG, but spokesman, Frederick Mousseau, says the situation has got worse.

Mr Mousseau told Don Wiseman that while the government supposedly tightened some of the rules around logging, Oakland's latest research shows the foreign companies, mostly subsidiaries of Malaysian company, Rimbunan Hijau, are exporting up to 40 percent more, while reporting their losses have more than doubled. 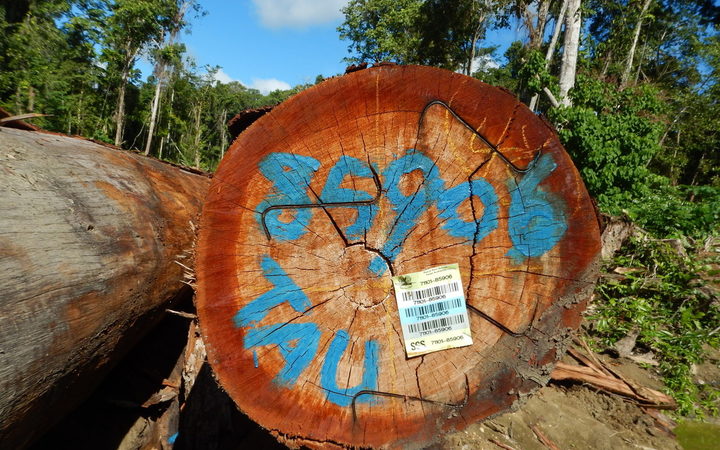 FREDERICK MOUSSEAU: Meaning that the more they export time the less money they make and the more financial loss they face, which doesn't make sense at all, from a matematical, economic perspective.

DON WISEMAN: You are suggesting that the logging companies, all these foreign companies, most of them under an umbrella of the Rimbunan Hijau group, that they are fiddling the books?

FM: it is clear from all the reports of the logging industry that there is a problem in the economic model there. They don't declare any profit, or barely any profit, and despite this Papua New Guinea has become the first [biggest] exporter of tropical timber. It is far above any other exporter in the world today. So these companies continue increasing their exports and despite that they declare less and less profit out of this export, so it doesn't make sense and the money, the interest for that to continue doing business must be somewhere.

DW: Part of the reason for this surge has been put down to the Special Agricultural and Business Leases, or SABLS. The government has said about these controversial leases that it is doing something, it'ss promising to do something but in the meantime the logging companies would appear to be having a field day.

FM: The government has been promising to do something for now four years and these SABL land deals are still in place. over the past ten years that most of them have been in place, companies have been logging and clearing the forest while the government keeps making promises. So it is really shocking to see this lack of action while the forests are being destroyed, people are losing their livelihoods and their environment, and just keep hearing the same promises and it's just unbelievable that nothing is being done to stop this disaster.

DW; What does the Oakland Institute want to have happen?

FM: We make research and we bring eviidence to the table and to the knowledge of citizens and policy makers to take action. What is clear - as we have shown in previous reports - is that most of the SABLs are illegal land deals and as illegal land deals they take away land from the legitimate landowners. What we have recommended is to bring justice to the land owners and land being returned to them. This is what we have been saying, like all the local civil society in PNG, but it is also what the government itself and the prime minister himself have been saying - without action. So we will recommend for the government and the prime minister to hold their promises and take action now. In terms of this tax evasion problem and the bigness of these logging companies, it is important for the people in PNG and the world not to buy the discourse of thes companies who claim to be bringing development to the country. What we show is they don't pay taxes and that their business that they call an industry is mostly about plundering the country's natural resources. There's no development happening out of this logging in Papua New Guinea. And it is so important to challenge the narrative that unfortunately some people, including the Minister of Forests in Papua New Guinea, that this is about doing good for the country. It is not doing good for Papua New Guinea and Papua New Guineans.