Many communities in Papua New Guinea's Highlands region remain traumatised and in need of help nearly six months on from a major earthquake.

February's magnitude 7.5 quake killed at least 180 people, caused widespread damage to buildings and infrastructure and - according to the UN- directly affected over 500-thousand people

Johnny Blades has been in the quake zone and filed this report. 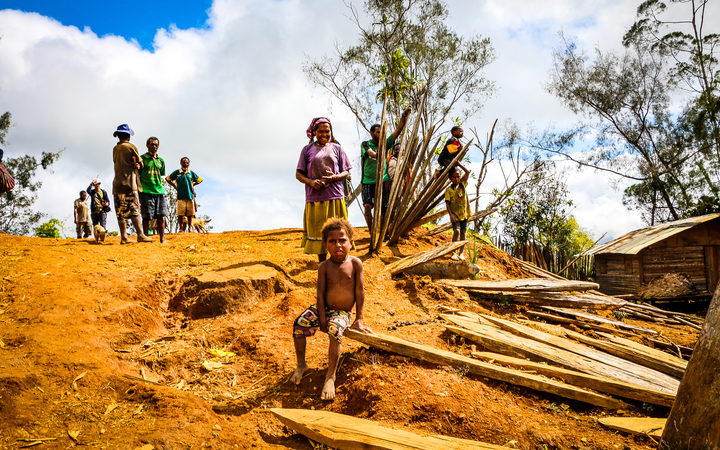 The big quake came in the middle of the night.

Jerolyn Lepi, a student who lives in the southern Highlands capital Mendi, says it had been a normal evening.

For a region unused to earthquakes, it created terror, confusion and fear.

Many remote villages were devastated, and communities forced to flee their homes

There were significant aftershocks, and massive landslides, some villages buried.

Richard Don is a leader from the remote mountain top village of Yalanda, which was significantly undermined by landslides, causing six deaths and extensive damage.

Donald Lippert is the Bishop of Mendi.

As if the quake disaster wasn't enough to contend with, Southern Highlands province was recently rocked by political unrest, when a mob went on a rampage over what was seen as a rigged election result, destroying a commercial airplane in Mendi, as well as the town's courthouses, governor's residences and other buildings.

Joseph Noah is one of a declining number of teachers still willing to come to Mendi to work.

In Hela province, where the quake's epicentre was located, tribal fighting with high powered weapons
caused dozens of deaths in recent months, prompting an extra deployment of PNG's defence force.

Nearly six months on from the major quake, local authorities battle on, distributing food rations where possible, yet stretched to provide healthcare and other basic needs for many displaced communities.

Eddie Yuwi is the deputy provincial administrator of Hela.

"We have no home at this very moment. It's very hard to live. We've run out of food... so at the moment we're very hungry now, and most of the people are really suffering."

The aftershocks are settling down. But the recovery and rebuilding challenge remains huge, according to PNG's emergency controller, Dr Bill Hamblin.

Speaking from Port Moresby, He says getting relief supplies to affected parts such as in Western province, no where near any road, presents massive logistic challenges.

He says support from international agencies and private donors has played a key part in the response.

Many affected Highlands communities have now returned to their villages to get on with re-establishing their communities.

Bishop Lippert says people are resilient, but questions the priorities of PNG's government.

The upheavals of 2018 in this Highlands region ensure a lasting trauma.

Amid lingering fears of another disaster, the future remains uncertain.