Communities in the remote northern atolls of the Marshall Islands are trialling new food security measures in a bid to reduce the impacts of future droughts.

The Marshall Islands has relied heavily on international food relief since the severe 2015 to 2016 El Nino drought, which continues to affect parts of the country.

The Pacific Community's Readiness for El Niño project is carrying out training this month on the atolls of Ailuk and Kwajalein. 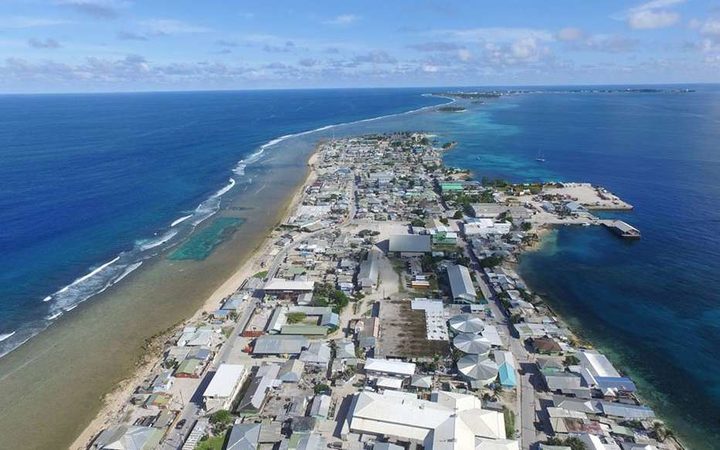 A drone photo shows the southern portion of Ebeye Island with the Kwajalein Army base headquarters island in the distance. The island is currently experiencing ongoing power outages for lack of generators. Photo: Anjojo Kabua

Gillian Chambers: In the Marshall Islands we're looking particularly at food security and water security. In the Marshalls there was a post-disaster needs assessment after the big drought in 2015-2016 and one of the things it highlighted was the damage to the agriculture sector and also a lot of the human hardship. So, the idea is instead of just relying on emergency relief during the next drought, as of course will continue, we in the Marshall Islands are particularly focusing on food security, and the idea is to try and get some more drought resilient crops growing. Some things like cassava, sweet potato, that can be stored in advance of the next drought. Also to look at some of the existing fruits that are already there; breadfruit for instance which is growing in many of the islands, particularly the ones we're working on. And also look at some of the traditional food preservation methods for these fruits so that they can be saved in advance of the next drought. Usually with an El Niño drought we'll have some warning. It could vary from just a few months to up to six months, so particularly if we are looking for food preservation then we can get the fruit preserved and saved in advance.

Mackenzie Smith: These new crops that will be introduced, will they be grown in households or in farms?

GC: Both basically. Some of them we could possibly use for the home gardening but we'll also be creating a demonstration plot or demonstration farm where we'll be particularly focusing on some of the more drought resilient species - and (the Pacific Community has) done quite a lot of work on this and we do have quite a lot of knowledge here - that we can basically start off at the nursery level. Also, on the demonstration plot, the idea is that we  use a technique called agro-forestry. So, you thin out some of the existing trees, be they senile palms or maybe some of the older breadfruit trees. You use them as the shade and the cover level and then beneath them we plant some of these more drought resilient types of yams and casava and these types of crops. But I should stress that one of the constraints we face in the Marshall Islands is the soil. We're looking at very low lying sandy atolls here so the soil is not exactly rich. So, one of the key activities that we're starting with at the beginning of the project is improving the soil; mulching, composting so we can try and put more nutrients, more nourishment in the soil before we plant.