The traditional Cook Islands handicraft of tivaevae has received a special Indian twist.

Now they are weaving new stories into their applique work and getting ready to exhibit it in October. 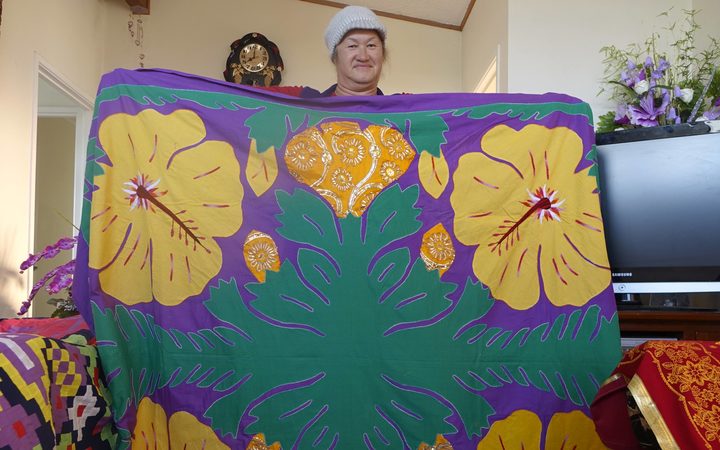 The traditional Cook Islands handicraft of tivaevae has received a special Indian twist.

Now they are weaving new stories into their applique work and getting ready to exhibit it in October.

The group is made up of about 30 women who received the sacred fabrics from the Takanini Sikh Society.

"The feeling for me, I was saying, oh wow we know what to do with this materials. But, the idea behind it is trying to recycle this material so we don't burn it."

The fabrics are known as Rumala Sahib and are normally given as temple offerings during celebrations.

They're handmade in India and cost over $100 a metre but after they're briefly used in the temple they're traditionally burnt or thrown away.

Daljit Singh is the spokesperson for the Takanini Sikh Society and he says they were burning around one tonne of the fabric every year.

"So this kind of stuff, donating when they're getting married or if there is any happiness in their family."
"Right, so birthday or...."
"Yeah, yeah. So yeah they bring - especially bride or bridegroom both bringing their own. So it's good that they are using it for a good purpose now. We're quite happy that it's for use."

Mr Singh says Sikhs around the world have been trying to work out how the holy cloth could be reused without upsetting anyone.

"We never actually sell it, we have to be give free. Because people actually giving free. So we can't actually make a profit. So it's only we can give a community which is working for a community."

With the help of organisations like Healthy Families and The Southern Initiative, the Sikh Society is now donating the fabric to several local organisations for re-use.

Around 200 women from groups such as the Cook Islands Development Agency New Zealand, Te Awa Ora Trust and Auckland Regional Migrant Services are now using their skills and creativity to give the fabric a second life.

The initiative has been taken up by other Sikh temples around New Zealand and in Canada, India, British Columbia and Australia.

Ms Teariki says she's excited to put the fabric to good use.

"I thank the Sikh community for sharing all this material with us and I think we are one of the luckiest to have this relationship with them and I want to continue to grow it."

But the idea did not win immediate acceptance.

"Some of our mamas, they look at and they say to me 'You know our culture? We don't mix any other community's culture within our culture because one day, they're going to say, 'that's our culture but the Cook Islanders have taken over on it."

But Ms Teariki believes the cultural exchange is a rare opportunity.

"For me it's good to share, the knowledge of our culture and it's good for the other community to share their knowledge about their culture. Then we work together and incorporate. Our ancestors and our .... from the olden days, they have left their culture with us today to know and to learn about it."

Ms Teariki says the exchange has helped build bridges and understanding between the Cook Islands community and the Sikhs.

"Before I met them, what I think about them was different. I thought they don't have the same culture and the way of thinking like us. But when I met them and when they tell us their stories, then I went, wow they're doing more than what we are doing. You know, our community don't do that and it gives me a good feeling about them."

Ms Teariki says the women are also upcycling the material to make bags to replace those made of plastic.

This is Indira Stewart.