The Australian Minister of Territories, John McVeigh, has been greeted by a colourful protest on a two day visit to Norfolk Island.

The 'Shirts4Hurt' protest has dozens of shirts hanging from lines to symbolise people 'losing their shirts' as Canberra's grip on the island tightens.

It is two years since Australia assumed control of Norfolk after 37 years of autonomy, but there have been frequent and ongoing protests.

It has not, so far, been possible to speak with the minister but Don Wiseman did reach the head of the Accommodation and Tourism Association, Rael Dondo, who is angry that Mr McVeigh is not meeting with the main organisations on the island. 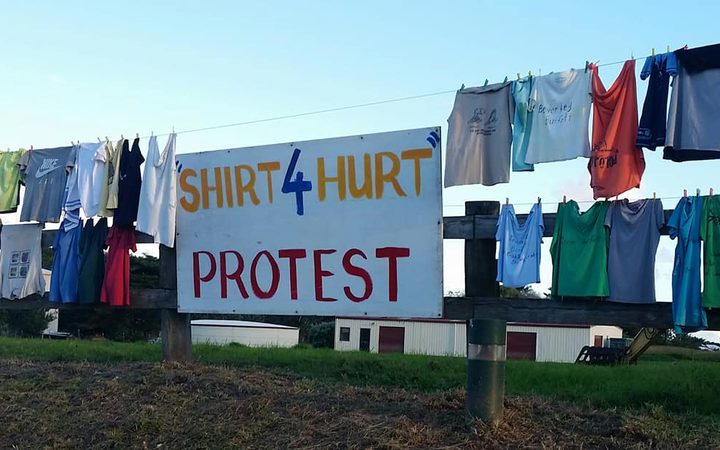 RAEL DONDE: He is talking with a select group that has been handpicked but he is not speaking with peak bodies on the island, like the Norfolk Islands People for Democracy, of the Accommodation and Tourism Association or the Chamber of Commerce, and peak organisations on the island, representing most of the businesses and in fact most of the residents.

DON WISEMAN: Well he is obviously frightened of you or has he just discounted you as a minority group?.

RD: Well we are not really a minority. you know the Norfolk Island People for Democracy for instance has probably over 70 percent of all adult residents on the island as members. Chamber of Commerce represents a significant number of businesses on the island and ATA - the Accommodation and Tourism Association represents most of the tourist accommodation on the island. So even if there are political differences it is still incumbent on the minister to hear these differences and perhaps consider there may be some merit in talking to organisations that may not be on the same page politically as the minister.

DW: Last time we spoke the government was about to bring in what you had cast as onerous conditions in terms of wages, fixing the wage system to what happens on the mainland. So I guess you have had a month of that, what has been the impact?

RD: Well there have been a couple of things happening Don. One is that the Chamber of Commerce has engaged the NSW business chamber to represent them with the Fair Work Commission through the courts. And so we are trying to establish a special dispensation for Norfolk Island. So a special labour award that would apply only to Norfolk Island. So that's progressing through the Fair Work Commission so in the meantime we had to implement the Australian existing award conditions and that has been terrible for the island. Many of the permanent employees have become part time employees, hours have been reduced, services have been reduced, etc, and so we are just battling through that and we are just hoping we will be successful through the Fair Works Commission, through the courts this month. It is coming close to an end. We hope by the beginning of August there will be an interim award that applies only to Norfolk Island, that recognises our unique circumstances on the island. But in the meantime we have had to implement the existing award conditions and that has thrown the industry into turmoil.

DW: The administration would say of course that the businesses might be upset but the workers should be happy.

RD: Well the workers won't be happy when they have lost their hours. I can talk from first hand experience and I can talk from the experiences of others who have reported back to me and workers are not happy at all. There are many that are seeking extra hours and their hours have been cut, quite significantly in many cases. And many of them have actually lost their jobs, completely. So for the few that are still in the workforce, they have fewer hours, they may have higher wages but they have fewer hours and so it is really a lose/lose situation for employees as well as employers.

DW: Now to welcome Mr McVeigh the people opposed to the him on the island have organised, well they have been losing their shirts.

RD: (laughs) That is correct. You can't miss it if you drive through town. There are shirts flying in the wind, on the fence line.

DW: Do you think he is going to understand or is it too subtle this protest?

RD: He won't miss seeing the shorts and hopefully it will pique his interest and he may try and uncover what this protest is all about.

DW: Why were shirts chosen?

RD: I am not sure where it actually originated but it is very visual and people are losing their shirts over this whole reform process and I suppose that has symbolic appeal but it also just visually - you can't really miss it. And especially on a breezy day like today, all the different colours, as you drive by, you cannot avoid noticing it.