An ecological project in Vanuatu has been helping people adapt to new laws brought in to save the country's marine and terrestrial environments.

Vanuatu communities in the project area are involved in sustainable change, including the recent ban on single-use plastics. 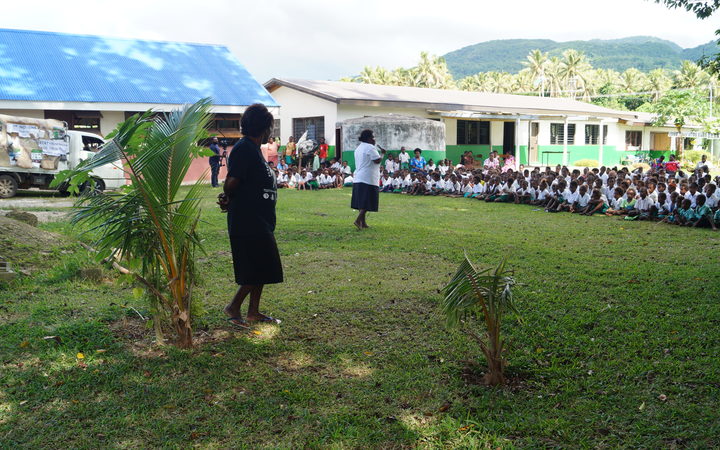 The Vanuatu programme operator, a senior environmental consultant from WSP Opus, Rowan Dixon says it's all about community-led resilience to climate change.

"In north Efate, where the site is in Vanuatu, that was really through working with those key partners there. That really came out to see that it was about ocean health, ocean reef. Their dependence on the reef. Sixty percent of their protein comes from the marine environment. And also their dependence on terrestrial resources."

Dr Dixon says RESCCUE has been working alongside the local community with international partners including OceansWatch, Landcare and C2O to help villagers come up with adaptive strategies to help deal with climatic changes.

He says it includes building on existing traditions of fishing bans as well as improved monitoring, management and enforcement.

The project's targets - to better manage waste and recycling, to improve village health and to protect livelihoods, including tourism - could complement government's own goals.

"Then we moved into the marine space where communities were trained on how to do monitorings and strengthen their conservation areas or set up new conservation areas, and that's when our Ministry of Foreign Affairs started to lead the activities, the ban, on single use plastic in Vanuatu."

According to Ms Andre, Live and Learn has been working with the grassroots, educating people about the impending plastic ban, and helping them adapt.

She says population pressures in urban areas have created new demands for cloth and paper bags.

Glarinda Andre says rural communities like those involved in the RESCCUE project are looking at ways to provide the capital Vila with traditional baskets.

"We've had a lot of coconuts and pandanus trees that were destroyed by Cyclone Pam so Vanuatu is just start to rebuilding its trees. It's going to be sort of challenging in that space as well where people will start to cut down those trees again to start weaving our traditional baskets to use."

Innovations like this will be needed in order to accommodate the next stage of the government's plastic ban which could include single-use items like shampoo bottles.

The Minister of Foreign Affairs Ralph Regenvanu says the issue for Vanuatu is that it's such a small-scale economy.

"Whether it's realistic to recycle these products into others is a question that will be determined but it's good that these pilots are being done so we can work out the economics of it. so it's fantastic that these organisations are actually taking the risk, taking the step to experiment so that we can see whether it is a viable option for Vanuatu."

Mr Regenvanu says a national audit is underway to help determine the next stages of the country's plastics ban.

The UN considers Vanuatu the world's most vulnerable nation to natural hazards like cyclone, tsunami, earthquake and volcanic eruption.

While the country can do little about these, it is taking a stand on the anthropogenic issues it faces like plastic pollution and climate change.

In the meantime the three-year RESCCUE project winds down at the end of this year, aiming to leave north Efate better equipped to safe-guard and sustain their resources for future generations.